Manager: This is Teofimo Lopez's Coming Out Party!

Tomorrow night at the MGM Grand "Bubble" in Las Vegas, IBF Lightweight world champion, Teofimo Lopez (15-0, 12 KOs) squares off with WBA/WBO/WBC Franchise world champion Vasiliy Lomachenko (14-1, 10 KOs) in one of the most anticipated bouts of 2020.

Lopez is managed by Split-T Management and promoted by Top Rank.

The fight, which will be shown live on ESPN, ESPN Deportes and ESPN + (Prelims at 7:30 PM ET, with the main card beginning approx. at 10 PM) has been front and center in the minds of boxing fans from all over the world for nearly a year when Lopez won his title with a sensational 2nd round destruction of Richard Commey on December 14, 2020 at Madison Square Garden. 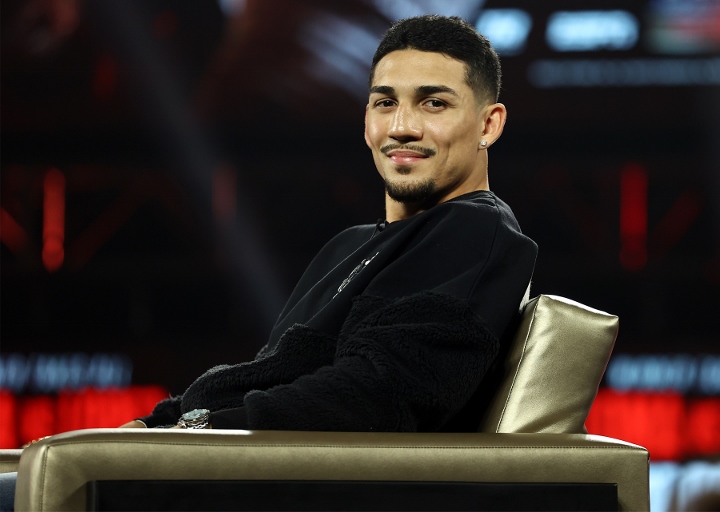 Lomachenko, who many have at the top of the Pound-for-Pound rankings, will be facing his toughest test, when he looks across the ring at the brash 23 year-old Brooklyn native in Lopez.

At Friday's weigh in, which was highlighted by a piercing stare-down, both fighters checked in at the lightweight limit of 135-pounds.

"Tomorrow night will be Teofimo's coming out party. It will be the culmination of all the hard work he and his father have put in over eighteen years. It has been an honor for me and the entire Split-T family to have worked with him these last few years, and look forward to him being the youngest undisputed World Champion of the four belt era," said David McWater of Split-T Management.

"Hard work pays off. Eighteen years in, and it's just the beginning, You haven't seen anything yet."

"The Takeover is not just a phrase we throw out there. This is the part where I'm leading the new generation. Winning this is a stamp and a mark to put on for the new era."

"Get your popcorn ready and just enjoy the show. It's 'The Takeover.'"

Teofimo Lopez is not the more talented fighter but? He may hit too hard, and just be too strong at the weight for Lomachenko. 'I don't actually see him as a great transcending superstar' he does not have those kind…

That’s just fact! I wouldn’t get to comfortable just yet. Also having power is great, but when you have it and can’t utilize it; then what? Teofimo no matter what will graduate on tonight rather it’s an upset win or…

Teo is the superstar boxing needs, he’ll give them just that by knocking out Loma who just isn’t the superstar that would help transcend the sport!

Best thing for boxing would be if Lopez sparks Loma out. Time for a new superstar.