Makabu vs. Cieslak Back on Course For WBC Title on January 31

The World Boxing Council has confirmed the world championship in the cruiserweight division to take place in Kinshasa, Democratic Republic of Congo, later this month - on Friday, January 31 between number one contender Ilunga Makabu and number two contender Michal Cieslak.

Makabu who is promoted by Don King will be fighting Cieslak for the vacant championship in the first world title fight in DRC in 45 years.

“I am very happy that the fight is going on as ordered by the WBC, and that Don King Promotions has clarified a few misunderstandings with his local promotional partners Tarik Saadi and General Luyoyo," said WBC President Mauricio Sulaiman. 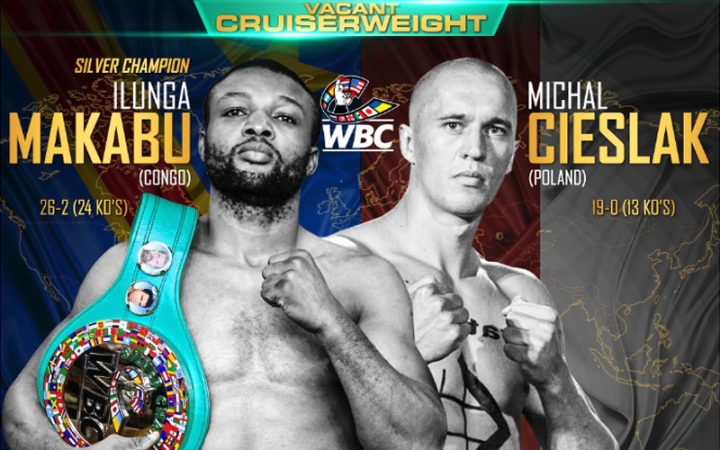 IN OTHER NEWS: Denmark’s Kem Ljungquist (9-0, 5 KOs) will feature on Team Sauerland’s historic co-promotion with Universum on January 25th as he faces Ukraine’s German Skobenko (5-4-2, 2 KOs) over eight rounds at the Work Your Champ Arena in Hamburg.

Ljungquist picked up three victories across 2019 as well as spending two separate spells in the United States as a sparring partner for lineal Heavyweight World Champion Tyson Fury and fellow contender Tyrone Spong.

The unbeaten Dane was most recently in action against Spanish Heavyweight Champion Gabriel Enguema in Horsens in June, where he scored a comfortable unanimous decision victory, and he is itching to return to the ring as he hopes to secure his first professional title in 2020.

“I’m very motivated to start 2020 strong. I hope I’ll get a lot of fights and move up the rankings get a title fight in the near future. We’ll see what’s going to happen, but whatever it is, I’ll be ready for it.”

“Kem has itchy knuckles and he can’t wait to put on a show in Hamburg," said Sauerland. "2019 was a great learning year for him and it’s testament to his attitude and ability that Tyson Fury twice asked him to go to Vegas to help him prepare.

“Skobenko is a tough, resilient challenger but Kem is the hottest prospect in Danish Boxing and it's time to put in a great performance and prove why we believe he is ready for a huge year.”

All the action from the Work Your Champ Arena will be broadcast live on SPORT1 in Germany and Viaplay in Denmark.

Loves a vacant title does Makabu.. sits around doing nothing and is rewarded for it. Affirmative action if I ever saw it. For the good of the weight class and mankind, Cieslak has to win. King is a thug, and…

[QUOTE=BigZ44;20333119]Bad ass fight. Makabu is systematically taking out all the Eastern European cruisers, he is a machine[/QUOTE] Makabu is taking out the poor cruiserweights. He's an Afrobum taking out Eurobums.

Bad ass fight. Makabu is systematically taking out all the Eastern European cruisers, he is a machine

[QUOTE=Koba-Grozny;20333076] I gotta ask though, you got some connection with the DRC or with either of these fighters? I ain't noticed you get super excited about a Cruiserweight fight before, though maybe I missed something, and whilst this is definitely…