Machado Very Pleased With Level of Work With Freddie Roach

WBA "regular" super featherweight champion Alberto "El Explosivo" Machado said he was satisfied with the work done in the camp with Hall of Fame trainer Freddie Roach at the Wild Card Boxing Club in Hollywood, California.

Machado, who has an undefeated record of 21-0, with 17 wins by knockout, will defend his title this Saturday against Mexican slugger Andrew "El Chango" Cancio (19-4-2, 14 KO's).

It will be Machado's third defense after winning this belt in October 2017. The fight will be staged at the Fantasy Spring Resort Casino in California and will be broadcast live through the DAZN digital platform. 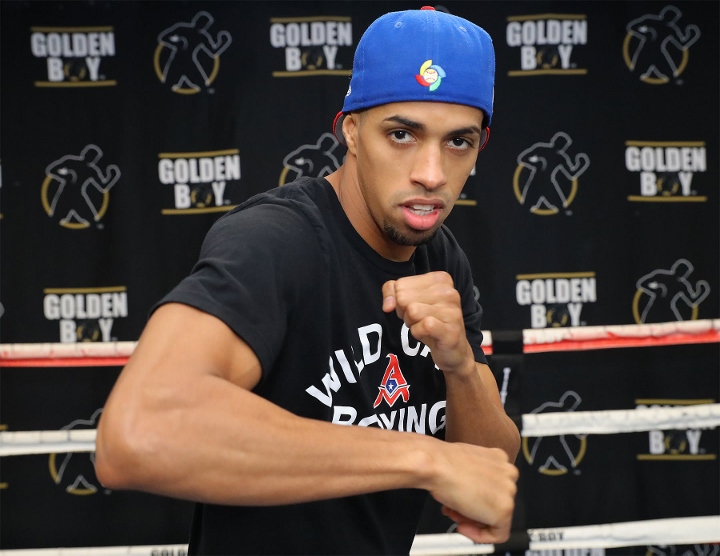 For this fight, the Puerto Rican boxer has been training at Wild Card since the end of December. He spent a total of six weeks there.

Machado began training with Roach in June of 2017, for his brawl against Mexican Carlos Morales to unify the NABO and NABA titles of 130 pounds. In that fight, the Puerto Rican defeated Morales by unanimous decision.

"I am very pleased. There (at the Wild Card) I have everything I need. The training has been very good. Also, my English has improved," Machado said in a telephone interview with Sara Hernandez.

According to the athlete's manager, Juan de León, Machado and Roach have developed a good chemistry since then.

"The chemistry between the two of them has been super. Alberto works hard in training. He asks Freddie questions and follows his strategies," shared De León.

When talking about his opponent, the athlete indicated that he is an aggressive fighter, but still understands that he can beat him fast. However, if the fight lasts 12 rounds, he is also prepared to go the distance.

"He's a tough fighter, typical Mexican style. He's persevering, with an aggressive style, and I know I have to take care of that and I'm ready to counteract it," he said.

"But I like that style. I like it because that gives me the space to be able to land my punches."

The fact that Davis is a paper champion is sad. Davis never beat Machado to become the Champion. Same thing happened years ago with Sergio Martinez and Chavez Jr

[QUOTE=Golden Boi 360;19495604]Why was Machado downgraded to regular champ from super?[/QUOTE] No reason really. I'm sure Mayweather and/or Al Haymon slipped the WBA some money in order for Davis to be called the super champion... It's all bullshet boxing politics...…

Why was Machado downgraded to regular champ from super?

[QUOTE=Joe shmo;19495353]Poor guy. He got his belt straight stolen by wba/PBC/mp. They caught him in an alley on his way home and ran down on him. I could see Mendoza and haymon in the front with the whole TMT team…

Poor guy. He got his belt straight stolen by wba/PBC/mp. They caught him in an alley on his way home and ran down on him. I could see Mendoza and haymon in the front with the whole TMT team standing…