Luis Nery: Aaron Alameda Has Never Fought At My Level Before

UNCASVILLE, Connecticut – Luis Nery knows Aaron Alameda hasn’t encountered anyone at all like him in any of his first 25 professional fights.

Alameda’s unblemished record has been built largely against unknown, pedestrian opponents. Nery is one of the most powerful punchers in the lower weight classes, a strong southpaw who will try to become a two-weight world champion when these unbeaten Mexicans square off Saturday night at Mohegan Sun Arena.

“Definitely, the level of fighter that Alameda has fought is definitely at a low level,” Nery said during a press conference Wednesday. “And now he’s fighting on Saturday somebody that he’s never fought before at this level, at my level.” 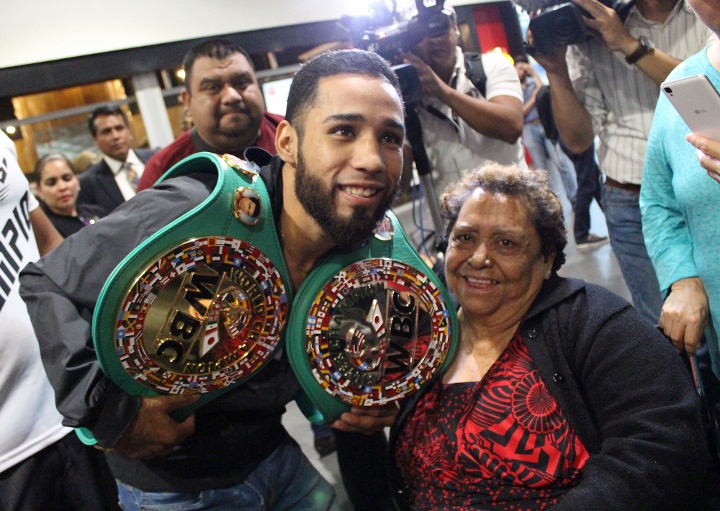 The 25-year-old Nery (30-0, 24 KOs), of Tijuana, and the 27-year-old Alameda (25-0, 13 KOs), of Nogales, will fight for a vacant version of the WBC’s super bantamweight title. Another unbeaten Mexican, Rey Vargas, has been designated the WBC’s 122-pound champion in recess because he suffered a broken leg that’ll keep him out of action for an extended period of time.

Nery is consistently listed as at least a 20-1 favorite. An unfazed Alameda promised that boxing fans will become well aware of him after he pulls off an upset in one of six fights Showtime Pay-Per-View will broadcast (7 p.m. ET/4 p.m. PT; $74.95).

“They’re gonna know who Aaron Alameda is after the fight,” Alameda said during the press conference.

In his five fights since Alameda edged Enrique Baranche (then 23-9) by split decision in an eight-rounder, he has fought opponents who were a combined 85-49-7 entering their bouts. Other than the three fighters who made their pro debuts against Alameda, Nery will be his first unbeaten opponent.

“In all truth, maybe the names that you see there on paper are not the best, are maybe not in Nery’s class,” Alameda said during a previous press conference. “But when you see me on the 26th of September, you’re really gonna know what Aaron is made of that night, on September 26th against Luis Nery. And [that’s] respecting that he’s a great fighter. There’s no doubt about that.”

Nery and Alameda will be the fifth of six fights Showtime will air altogether Saturday night. Their 12-round championship match will immediately precede a main event that’ll match Houston’s Jermell Charlo (33-1, 17 KOs) against the Dominican Republic’s Jeison Rosario (20-1-1, 14 KOs) in a 154-title unification bout.

[QUOTE=IRONCHINHAGLER;20779593]Let’s not overstate the OBVIOUS!! Guy has fought nothing but 8 rounders his entire career! That he evens gets a title shot is PBC at its pathetic worst![/QUOTE] You need to calm down.

Let’s not overstate the OBVIOUS!! Guy has fought nothing but 8 rounders his entire career! That he evens gets a title shot is PBC at its pathetic worst!