It was a crossroads bout between Hernandez and Saavedra, who entered the fight having lost his previous four bouts.

Saavedra set the tone from the opening bell, dropping Hernandez in the opening round. Hernandez never got into any rhythm or was able to create any distance, as Saavedra found success fighting on the inside. 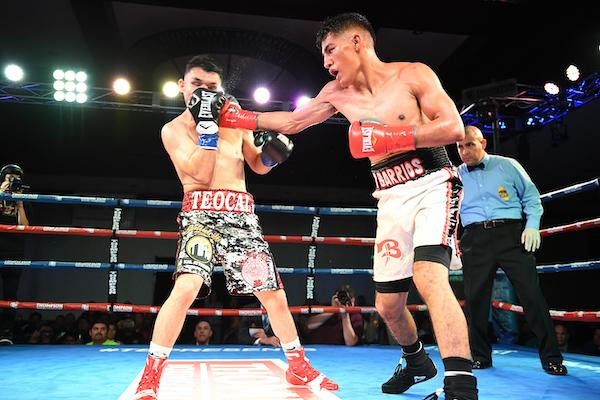 Saavedra stunned Hernandez about a minute into round three, forcing Hernandez to hold on.

Hernandez did manage to outbox and outland Saavedra during the middle rounds, but Saavedra was the busier and more-effective fighter during the last two rounds of the fight.

Hernandez (8-1-1, 3 KOs), who resides in nearby Santa Ana, loses the first fight of his pro career.

In the co-feature, junior welterweight Ruben Torres stopped overmatched Elliott Brown at the end of the second round.

Torres (8-0, 7 KOs), who is a communications major at Cerritos College, dominated the fight from the opening bell. Torres ripped combinations to the head and body, forcing Brown to fight defensively.

Brown (2-7, 2 KOs) decided not to answer the bell to start the third round.

Brewart dropped (4-0, 2 KOs) Reyes with a left hook to the body in the opening round. Brewart ended matters in round two with a lead right cross to the head, dropping Reyes flat onto his back.

In the opening bout of the Thompson Boxing Promotions card, welterweight Leo Ruiz (4-0, 2 KOs) knocked out Adan Ahumada (3-7-2, 2 KOs) at 49 seconds of the second round.

Francisco A. Salazar has written for Boxingscene.com since October of 2013 and has covered boxing in Southern California and abroad since 2000. Francisco also covers boxing for the Ventura County (Calif.) Star newspaper. He can be reached by email at [email protected] or on Twitter at FSalazarBoxing