Luis Angel Cabrera is ready for the big leagues.

The former amateur standout from Venezuela has inked a multi-year promotional pact with All-Star Boxing, Inc., the Miami-based outfit announced on Tuesday. The move comes in lieu of a run at serving as a two-time Olympian, opting to punch for pay rather than for a spot in 2020 Tokyo.

“It’s a dream come true for me to finally get the opportunity to turn pro to help my young family,” noted Cabrera, a 24-year old lightweight who competed in the 2016 Rio Olympics. “I am happy to have signed with Tuto Zabala's All Star Boxing, Inc a great company.

“I want to follow the footsteps of Jorge Linares a great world champion from Venezuela. I look forward to making a statement in the United States land of the opportunities.” 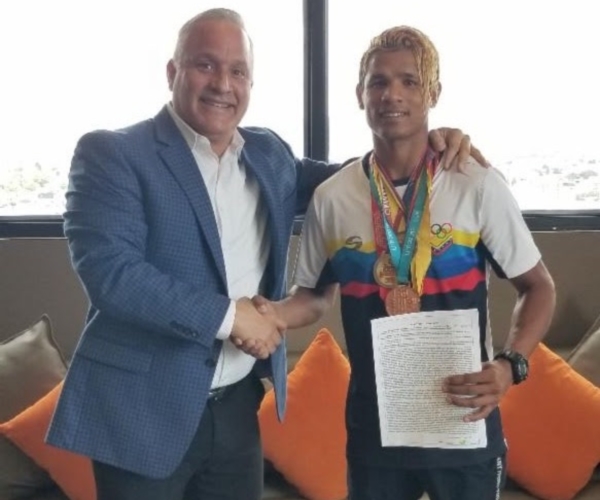 Cabrera will make his pro debut on February 21, as part of the 2020 season premiere of Boxeo Telemundo which takes place at Miccosukee Indian Gaming Resort in Miami, Florida. An opponent has yet to be established for the bout, although Cabrera will appear on the televised portion of the show topped by a junior flyweight battle between Jonathan ‘Bomba’ Gonzalez and Saul ‘Baby’ Juarez.

Most notable among his accomplishments was the manner in which he qualified for 2016 Rio. Cabrera came up aces in the 2016 Olympic qualifiers in Buenos Aires, scoring tournament wins over Henry Lebron and Teofimo Lopez.

Both boxers are currently signed with Top Rank. Puerto Rico’s Lebron (11-0, 9KOs) will appear on the undercard of the February 28 edition of Boxeo Telemundo in Kissimmee, while Brooklyn-based Lopez (15-0, 12KOs)—whom represented Honduras in the 2016 Olympics—has since captured a lightweight belt and is heading into a unification showdown with Vasiliy Lomachenko later this spring.

Naturally, expectations are lofty for Cabrera to go on to achieve similar success in the pro ranks.

“We are delighted to bring blue-chip boxer, Luis Angel Cabrera, onboard,” notes Felix ‘Tutico’ Zabala Jr., president of All Star Boxing. “We have a great plan in mind to make Cabrera a star, showcasing him in Telemundo and on our promoting partners' platforms and most important our fan base of Miami and Orlando.”

Cabrera dropped a narrow decision to Japan’s Daisuke Narimatsu in the opening round of the 2016 Rio Olympics, opting to remain in the amateurs for another three years. He also enjoyed a four-year run in the World Series of Boxing as part of the Venezuela Caciques from 2015-2018.