Lopez: Would've Been Stopped If I Were The One Hurt In 7th Round

NEW YORK – As much as Josesito Lopez respects Keith Thurman, he couldn’t help but feel that the defending champion was afforded more margin for recovery than he would’ve been allowed.

Lopez claimed during their post-fight press conference late Saturday night that referee Steve Willis would’ve stopped their fight in the seventh round if he were hurt the way Thurman was damaged. A contemplative Willis took a close look at Thurman multiple times as Lopez pummeled him for much of the second half of that stunning seventh round at Barclays Center in Brooklyn.

“I felt like it was, you know, it could’ve been one more punch away in many instances of that round,” Lopez said. “You know, I felt it if would’ve happened to me it would’ve been stopped. I know that. You know, but he could’ve easily stopped it. But maybe it was one punch away.” 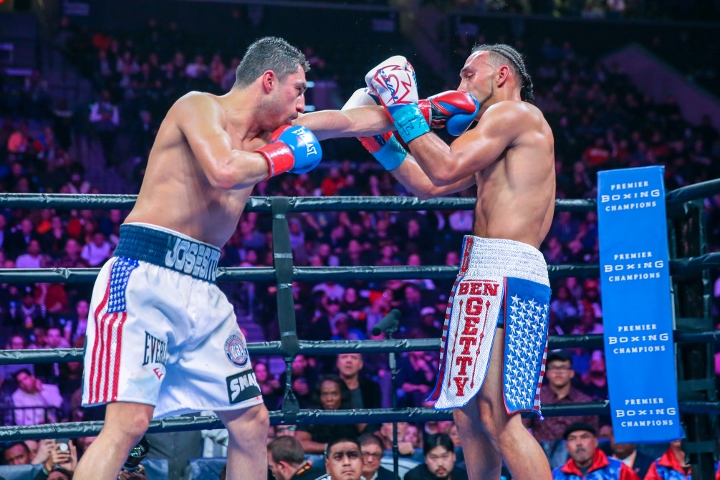 Lopez’s complaint notwithstanding, Willis was right to afford Thurman leeway, even when it appeared Thurman was about to get knocked out by a huge underdog. Thurman survived Lopez hurting him badly in the seventh round to have a strong eighth round, during which Thurman quickly got his legs back under him and showed he had recovered from Lopez tattooing him with a perfect straight right hand and numerous hard power shots thereafter in the seventh round.

Robert Garcia, Lopez’s trainer, realizes his fighter nearly pulled off what would’ve been an epic upset in the main event of a “PBC on FOX” tripleheader. Garcia also praised Thurman for showing such resolve during that trying seventh round.

“Look, Josesito landed so many good punches in that round that if the ref would’ve stopped it, I don’t think there would be too many people complaining,” Garcia said. “Keith is still a strong survivor. He did whatever it took to survive that round. He moved, he tried to do everything possible. You know, Josesito landed so many punches that if the ref would’ve stopped it – Steve was very close to stopping it – I don’t think there would’ve been too many people complaining. I think it would’ve been a fair stoppage. But he didn’t, and look, Keith still survived it and came back to continue boxing the way he was boxing. You know, he fought a great fight. He was in great shape. He’s got a great team behind him. You’ve gotta respect that, too.”

[QUOTE=SHOOTALLCLOWNS;19469926]when its one of your own like clenelo getting gift decisions you have no problem with it!!![/QUOTE] I dont think Canelo ever got a gift decision and MILLIONS agree with that. Just a few heartbroken rejects who band together to…

who knows guess it depends on ones perspective if there was favouritism from the referee or not for this fight on thurmans behalf, lopez feels he was cheated off that stoppage but others say he could not finish the job…

What a sore loser. If the ref stopped it then the better man would have been robbed of a victory, as we all saw him recover and continue to whoop your ass just fine. Source grapes because he didn't have…

[QUOTE=Dean_Razorback;19468104]i think some people didn't read the article or lopez statement. he is saying that if it was the other way around, he being hurt in the seventh instead of thurman, the same referee probably would've stopped the fight.[/QUOTE] I’m…

[QUOTE=daggum;19468117]he got a debatable win against porter so it was always in doubt. crawford and spence seem like too much for him [B]so i think he hurts himself so he can fight a tune up every year and avoid the…