A star is born.

Or, at least, arrives.

Another (unofficially) got off the deck and scored his seventh straight knockout across two weight classes.

Overall, it was a good night for boxing on ESPN as fans were treated to a solid top to bottom show without having to log on to the app. As 2019 turns the page to 2020, what does it mean for the victors, Teofimo Lopez and Terence Crawford, and their divisions, lightweight and welterweight? 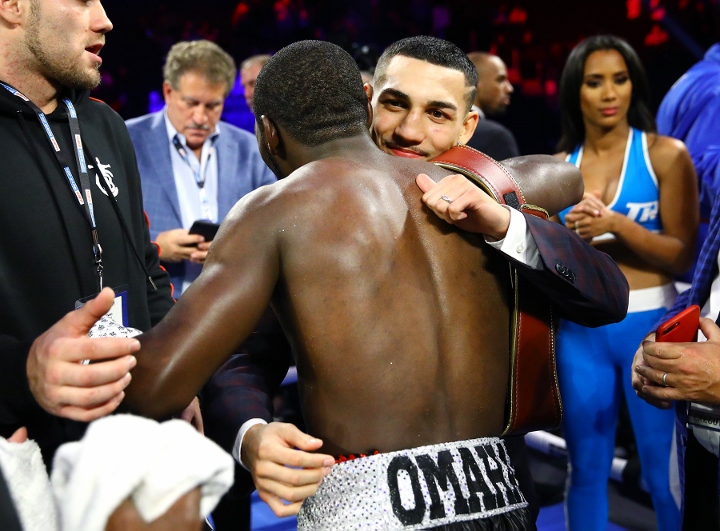 The Future for Crawford: Fights don’t happen on paper. Going into the weekend, Crawford’s defense against Egidijus Kavaliauskas felt like too much of a foregone conclusion while Lopez’s challenge of Richard Commey felt like the real pick ‘em battle. In the end, it played out as expected in Crawford winning. The road there was more entertaining than expected and ended up being the scrap of the night. Kavaliauskas fought his heart out and could have been credited with a knockdown in round two. He wasn’t, and a tangle between the fighters left it a fair enough call, but Crawford was buzzed.

Crawford responded by doing what he does. There are few fighters in boxing that carry the sheer menace Crawford does in a ring. He’s got a switch only certain fighters do; a zone he goes in to when he smells blood or determines he has to punish someone for the impudence of standing their ground against him. It might get him beat some day but it’s fun to watch. The question is who will we watch it against next year?

Crawford’s opponents at welterweight have been solid enough professionals but they aren’t the top of the class. Crawford needs to find a way to do business with someone in the PBC or he’s going to have to wait for a challenge to emerge from 140 lbs. The former could come in the form of Shawn Porter, the name being bandied about the most right now. The latter, if it’s Toop Rank stablemate Jose Ramirez, could be the sort of fight that sells a massive crowd if placed in the right city. Crawford has special talent but he doesn’t have a special resume as yet. At 32, he needs to fill out the latter with haste.

The Future for Lopez: It looks like all signs are go for what Top Rank has carefully built over the last year or so. Bob Arum once said of Roy Jones, paraphrasing, that it was never a lack of opponents but a lack of knowing how to promote opponents into rivals. Teofimo Lopez, with a monster right hand to essentially win the IBF lightweight crown from Richard Commey in round two, is now a rival. Vasyl Lomachenko is the consensus pick for the world’s best at 135 lbs. Some think he’s the best fighter, period, in the world. Lopez is younger, less experienced, and hungry. Their showdown is coming, likely as early as April. That is Lopez’s future and he’ll win or lose in the ring but, even if it’s the latter, it still feels like we are only at the beginning of finding his ceiling.

Here’s some extra intrigue: in discussing the Lopez fight at ringside, Lomachenko said on ESPN he’d like to follow Lopez (assuming a win) with Gervonta Davis. Davis has emerged as a force at the ticket window despite a still light resume but he is ready for the big fights and hitting his prime. If Lopez defeats Lomachenko, how big could a fight with Davis get? If Lomachenko wins, do we get Davis by the fall? Lightweight is fun right now.

[QUOTE=JakeTheBoxer;20259212]No way [B]Americans[/B] will make Tank - Haney, because they wanna hype both.[/QUOTE]I'm not in the mood to go there, so i'm not taking the bait! Tank vs. Haney would be a great set up, for the Loma vs. Lopez…

Since Loma has a date in April for Teo, then I would love to see Tank vs. Devin Haney! C'mon Floyd! Make It Happen! LSC is too small! Let him fight GRJ @ 130! If not Haney, then at least…