An amateur standout, New York’s Cuevas was a pro welterweight from 1964-70, before late legend Cus D’Amato convinced him to start training boxers. Cuevas opened his own gym, the Apollo Boxing Club, in 1976 in the Bronx, where a young Mike Tyson worked with Cuevas at one time. 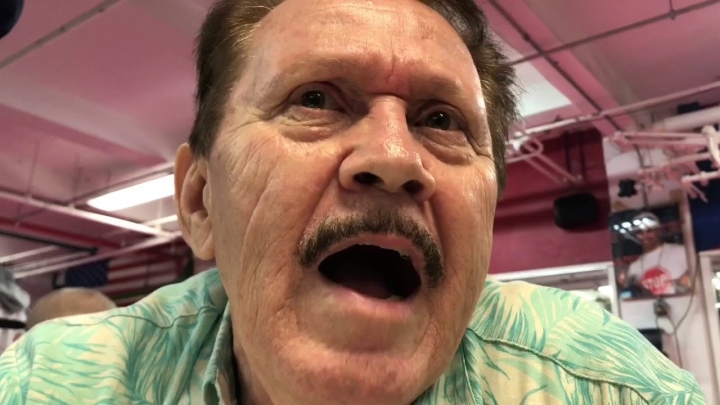 During the 1970s, 1980s and 1990s, Cuevas worked countless corners as both a trainer and a cut man. He worked alongside late trainer Al Certo as a cut man for two-weight world champion James “Buddy” McGirt, was a cut man for another two-division champion, Vinny Pazienza, and served in the same capacity for 1976 Olympic gold medalist and longtime contender Howard Davis Jr. He was a trainer and cut man for lightweight champion Carlos Ortiz during Ortiz’s comeback and also worked the corner of hard-hitting heavyweight contender Earnie Shavers.

Cuevas learned his craft in part from Chickie Ferrara, renowned for his work as a cut man for Muhammad Ali and Rocky Marciano. He also managed several fighters.

Cuevas continued to work in his later years at Mendez Boxing, a gym in Manhattan. A native of Puerto Rico, Cuevas was inducted in the New Jersey Boxing Hall of Fame on November 14 at The Venetian in Garfield, New Jersey.

“I’m very proud of what I accomplished because I grew up by myself,” Cuevas told boxinginsider.com the month before he was inducted into the NJBHOF. “Many people grow up having help, but I didn’t. I became a man at 11 years old. I have worked with so many kids and helped them get off the streets, and I am very proud of that.”

Cuevas also recalled watching a teenage Tyson in his gym.

“I knew Tyson since he was 13 years old,” Cuevas said. “When I first met him, Cus told me that he was going to be a world champion. I wasn’t sure if he had what it took because he was so short and chubby. He was also just a shy and nice kid. In my head I thought, this kid is just way too nice to really have that killer instinct to become a champion, but man was I wrong. The first time that I saw him fight in my gym is when I knew he was special. He was so nice.

“You would think he was a sissy, but when he fought, oh my gosh. He would destroy people. I remember Mike knocking out some kid that was 18, and he was 14 years old at the time, so he was always just an amazing fighter. I used to advise him and he used to work out in my gym. Most of his amateur fights used to happen in my gym, and he would put on a show every single time.”

Rip champ. There's guna be more before this is over.

Nelson Cuevas is a huge loss for boxing. Rest in Peace my Champ Nelson Cuevas, you earned it. :sad2:

Wow, a lot of knowledge and history lost here. Hopefully we can all KO Karona RIP

A great man and didn't take any **** from anyone, he dropped many in his day, love you papi...