The biggest boxing match of the year airs live on ESPN Saturday, December 9 from the Theater at Madison Square Garden in New York City. 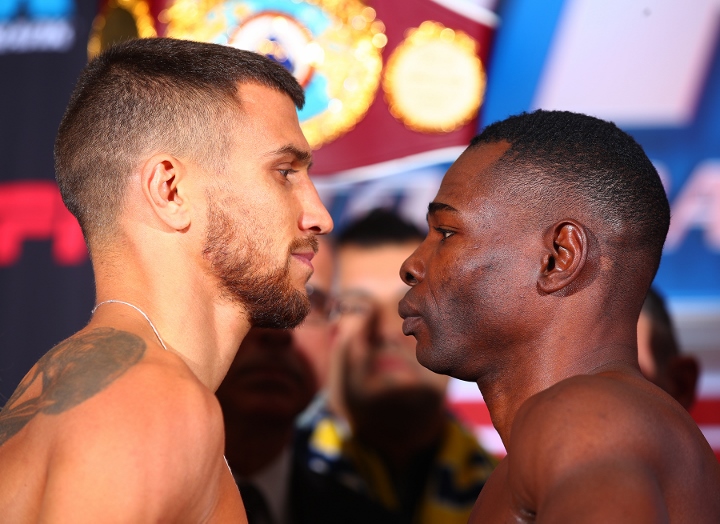 Saturday’s fight marks the first time in boxing history that two-time Olympic Gold Medal winners will face each other at the professional level. Rigondeaux won Gold at the 2000 Sydney and 2004 Athens Olympic Games while Lomachenko won Gold at the 2008 Beijing and 2012 London Olympic Games. The International Boxing Hall of Fame will enshrine both pairs of gloves used in Saturday’s bout.

ESPN’s official coverage of fight week kicked off Tuesday, December 5 with five Top Rank athletes on the Bristol campus for a Car Wash featuring a live SportsCenter appearance for Lomachenko. The final press conference streamed live on ESPN3 Thursday, December 7 and the weigh-in airs live on ESPN2 Friday, December 8 at 2 p.m. ET. Also available on fight night Saturday, December 9 will be a five-box mosaic offering Around the Ring streaming live on ESPN3 and the ESPN App with enhanced views of the ring as well as access to both fighter locker rooms and corner cameras.

[QUOTE=CubanGuyNYC;18325522]Yes, you’re entitled to your opinion. If this isn’t an alt, then I apologize. Just seemed odd you expressed that particular opinion with what just happened to be your first post. Good luck.[/QUOTE] Yea it was purely coincidental. And thank…

[QUOTE=CubanGuyNYC;18321838]Bro, you created an alt for this? You gotta be fu[I]c[/I]king kidding me. SMH[/QUOTE] Created an alt? This is my first and only account #1. #2 im entitled to my opinion whether or not you agree with it and no…

[QUOTE=Shape up;18321817]How, did he bully him with his weight, size, no, he used angles and peppered him, Rigo was outclassed pure and simple[/QUOTE] I am agree with u, but Loma was the natural bigger man, hence he had the bigger…

[QUOTE=JcLazyX210;18319532]They set Rigo up, he gave up the weight and the height. it turned into the Loma show. :sad2:[/QUOTE] Special shout outs to San Antonio