Lomachenko Smiles: Teofimo Lopez Went Twelve With a Nobody

Last week, undefeated lightweight Teofimo Lopez went twelve rounds for the first time in his career, when he picked up a tougher than expected unanimous decision win over Japan's Masayoshi Nakatani in an IBF final eliminator.

The contest woths Commey is being targeted to take place before the end of the year. 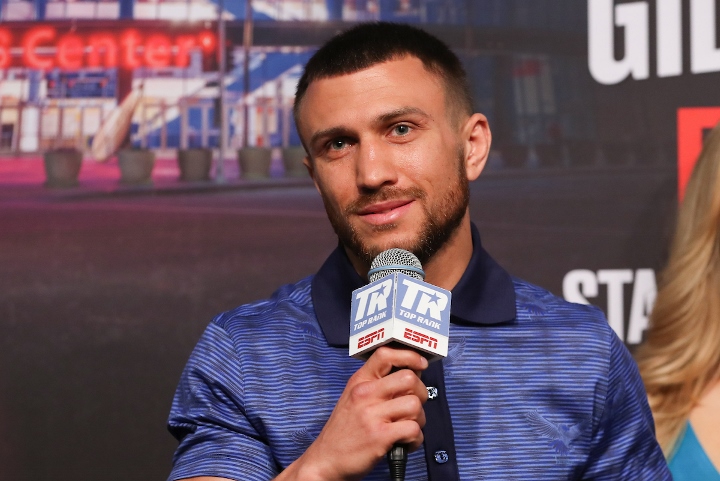 Since last year, Lopez has been calling for a showdown with division ruler Vasiliy Lomachenko.

He believes Lomachenko is a bit overrated and ready for the taking.

Lomachenko will return to the ring on August 31, when he faces Luke Campbell in a battle of Olympic gold medal winners. At stake will be the WBO, WBA, WBC world titles at the O2 Arena in London.

Should Lomachenko beat Campbell and Lopez defeat Commey - it's expected that the two of them will collide for all four titles in early 2020.

Based on all of the trash talking in the last few months by Lopez and his father, Lomachenko has ripped apart the unbeaten prospect for his recent performance against Nakatani.

While he believes Commey will defeat Lopez, that's not what Lomachenko wants to happen. He wants to personally punish Lopez in the ring.

“[He went] twelve rounds with nobody? It’s a very big question for him, for his father, for his bullsh*t what he say before. Very big question," Lomachenko told Talk Sport.

“If we talk about his future fight with Commey, I think Commey wins, but I don’t want [that]. I want Lopez. Of course, of course.”

[QUOTE=TarasMarcenko;19935872]Must be one of the low boxing IQ level people who troll and have nothing of substance to add.[/QUOTE] Red K for stupidity.

[QUOTE=BoxingIsGreat;19935865]Full of BS post.[/QUOTE] Must be one of the low boxing IQ level people who troll and have nothing of substance to add.

Says the one sentence response poster. Must be one of the low boxing IQ level people who troll and have nothing of substance to add.

[QUOTE=TarasMarcenko;19935857]Some ignormus on here was saying that Loma was ducking Tank. Are you ****ing serious with your lack of knowledge of what really is going on in the world of boxing? And another dumbass said Tank knocks out Loma in…