Bob Arum has confirmed to BoxingScene.com that the lightweight unification bout between WBA titlist Vasyl Lomachenko and WBO belt-holder Jose Pedraza, originally scheduled for December 1st at the Forum near Los Angeles, will now shift to December 8th at the Madison Square Garden in New York.

"It's not finalized but that's what it's going to be," said Arum on Thursday morning to BoxingScene.

The veteran promoter explained - "December 8th is the Heisman Trophy (presentation on ESPN) and we wanted the strongest possible fight in New York where the Heisman is after the Heisman Trophy ceremony is over because the lead-in is unbelievable for a good rating and when we played around with everything, we realized that 'Loma' had done a fantastic rating last year with (Guillermo) Rigondeaux  and we figured we'd go back to the well." 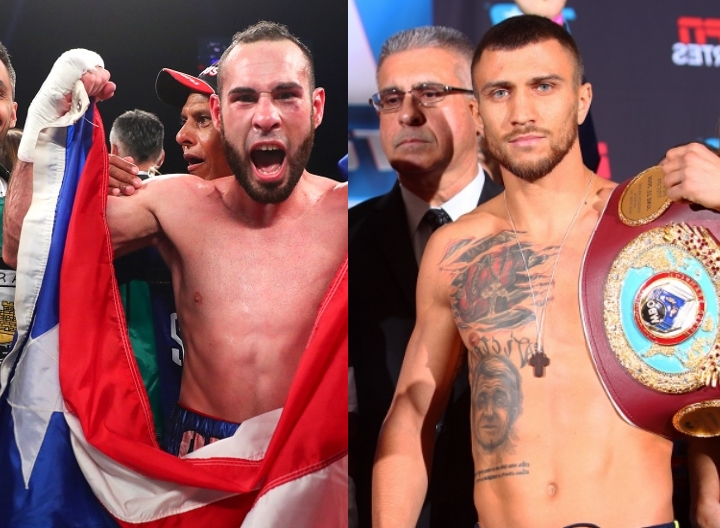 And yes, this was an ESPN decision, as much as it was a boxing one.

"They had every say in it, I mean, we're partners with them. We can't do anything without them," said Arum.

"Lomachenko was supposed to go on the 1st (of December) on ESPN+ so we had to shift him to regular ESPN on the 8th, assuming everything gets approved by ESPN."

Arum noted, "December 1st is still LA, still the Forum. We're putting together a tremendous show not Lomachenko, but a tremendous show with the title fights and bells and whistles and we'll announce that when we have it all put together."

Lance Pugmire of the LA Times reported on Wednesday that the heavyweight title bout between Deontay Wilder and Tyson Fury could land at nearby Staples Center. To which Arum responded - "That's fine, what do I care about that? That show doesn't bring in the same crowd as we will. We have mostly a Hispanic audience that we're going to be getting and that's not an audience for Wilder-Fury.

"There's a hell of a lot of good fights to go around and a lot of fans to go around. If Wilder-Fury go at the Staples (Center) that's fine, we'll still go to the Forum."

I think Pedraza is a much easier match up style wise for loma. Beltran with his style and size would have been a much more taxing fight for Vasyl. I see loma putting on a clinic and getting the stoppage.…

[QUOTE=The Big Dunn;19122829]Wilder/Fury is the much better fight. It's for a HWT title. I would think boxing fans would choose that.[/QUOTE] Not in America.

[QUOTE=pillowfists98;19123722]Yes, in Quebec City.[/QUOTE] Hope they put it on Fox before the PPV like they used to do with the UFC

Adonis Stevenson - Oleksandr Gvozdyk Is on that same date right?