Lomachenko: In My Country, Lopez Would Not Run His Mouth Like This!

WBA, WBC 'franchise' and WBO lightweight champion Vasiliy Lomachenko is not impressed with the boasts of Teofimo Lopez, who holds the IBF's version of the puzzle at 135-pounds.

The two champions are scheduled to collide on October 17 at the MGM Grand Conference Center in Las Vegas. 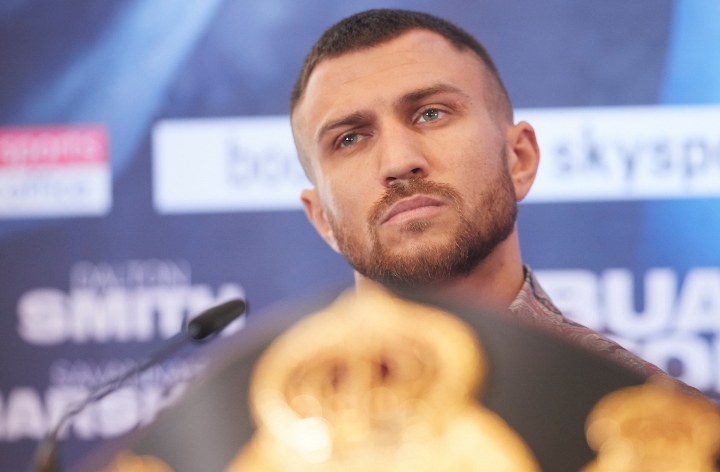 Lopez has promised to not only blast out Lomachenko - he's vowed to potentially send the two-time Olympic gold medal winner into retirement.

"In my country, if you insult somebody, you'd better be prepared for them to hurt you. "If we were back in my country, he would learn pretty quickly that he can't run his mouth like that," Lomachenko told Sky Sports.

"Whatever I say, I believe in it. So what he's saying, for example, he actually believes. But if he doesn't follow it up with actions and fulfil those words, then he chose those words poorly to begin with. I'm definitely not going to feel sorry for him."

Lomachenko is not concerned with the layoff.

His last fight was a hard-fought twelve round unanimous decision over Luke Campbell.

"Everything is good," Lomachenko said. "I've had a one-year break without a fight. Now I'm healthy and happy. I'm 32, I've been very long in this sport so of course my body has tired a little bit. But I've had a break.

"I am close to my goal [of having all the titles]. This is one step closer to my dream. Fans love the interesting fights with top fighters. Now we have a unification and we are the top fighters in this weight class. It was my goal when I started my pro career. It was always my dream. I did 126lbs, I tried 130lbs, now I try 135lbs and it is very close. I want to unify.

"I want to put my name in boxing history. I started very early - my second fight of my pro career was a world title fight. I want to do something special with this opportunity."

[QUOTE=Songbird;20807313]yes i agree with u teo has been carrying this fight promotion wise, well done teo[/QUOTE] Loma even thanked him for it!

[QUOTE=El_Cholo;20807309]Loma has barely opened his mouth until the last few weeks when the media obligations have been required. Loma as been quietly working away whilst Lopez was mouthing off weekly.[/QUOTE] yes i agree with u teo has been carrying this…

[QUOTE=Bigchip;20773314]My favorite fighter in boxing is Vasiliy Lomachenko. I mean he is awesome!!! But Vasiliy you: 1. Are not in your own country. 2. Are beginning to talk a little too much, which is out of character. Let this kid…