Lomachenko Manager: No Surprise Rigondeaux Quit, It's a Shame

It was a rather abrupt and surprising end to the bout between WBO super featherweight champion, Vasyl Lomachenko (10-1, 8 KOs), and Guillermo Rigondeaux (17-1, 11 KOs).

While the Ukrainian was dominating the action after six rounds he wasn't putting a beating on Rigondeaux, who had moved up two weight classes for this fight.

But as he went back to his corner after the sixth round, Rigondeaux, called it quits claiming a hand injury. It was a disappointing finish to what was a highly anticipated match-up. 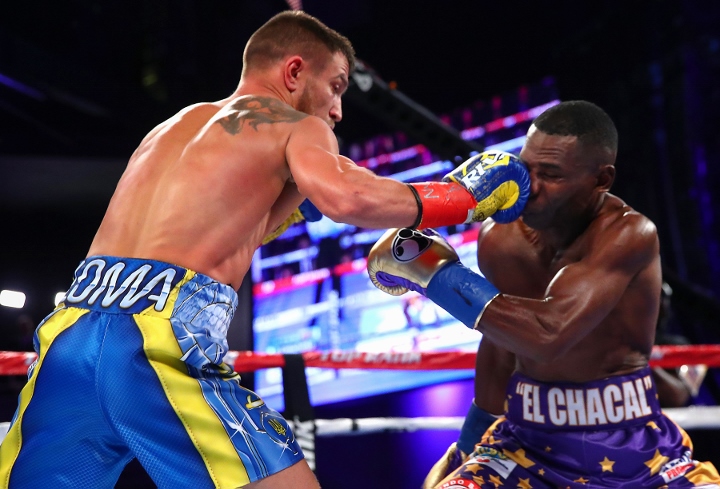 It was the first defeat Rigondeaux, as a pro or amateur, since 2003. For Lomachenko, it was the fourth opponent in a row to calls it quits during the fight - following Miguel Marriaga, Jason Sosa and Nicholas Walters - with Sosa and Walters being former world champions.

"No, I wasn't surprised, even Lomachenko said during the fighter meetings (with ESPN), he said, 'I'm not going to be surprised if he quit.' So it's a shame for these boxing these guys coming and quitting right here on their stool instead of fighting. Even being with a boring fighter like Rigondeaux, Lomachenko did such a good performance and gave an entertaining fight," Klimas told Boxingscene.com.

Many believed that Rigondeaux (the WBA super bantamweight belt-holder) was severely handicapped with the fight being contested at a weight limit of 130-pounds but Klimas points out that when his man was the WBO featherweight titlist, they had tried to make a fight with Rigo on several occassions and says the Cuban boxer wanted a catch-weight.

[QUOTE=BigOneFromCuba;18327705]it definitely needs to be an investigation into why rigondeaux was not active. He never in his career perform like that. He did nothing. And make sense to me now that he was told that he should not win it…

[QUOTE=Socialtwinkie;18327905]The reason why he wasn't active is because Lomachenko didn't play Rigos game. Rigo likes to sit and slow the pace down. He accomplishes this by finding an angle he likes. Sitting on it and waiting for the other guy…

[QUOTE=j.razor;18327842]The only way he could redeem himself is for a rematch & a KO victory which I really doubt now it happens....[/QUOTE] I kind of disagree my man, if the opponents at his normal weights now think Rigo is there…

[QUOTE=j.razor;18327856]I give him a d- for his effort. He did not fight like he usually fights & it could of been many reasons but not cuz it wouldn't be good for his career. It could of opened more doors with…

Rigo is a lil baby El Chacal. A dirty f-king fighter who loves to grab hands when on the inside, push boxers head down for some uppers and hit dudes after the bell. Too bad for Rigo his lil shenanigans…