Lomachenko To Linares: Let's Do This at 135, Do You Want It?

Boxing's fastest ever two-weight world champion Vasyl Lomachenko is planning an an assault up at lightweight and wants to face Jorge Linares.

After winning world titles at featherweight and super featherweight in just 11 professional outings, Lomachenko has established himself as one of the best boxers on the globe. 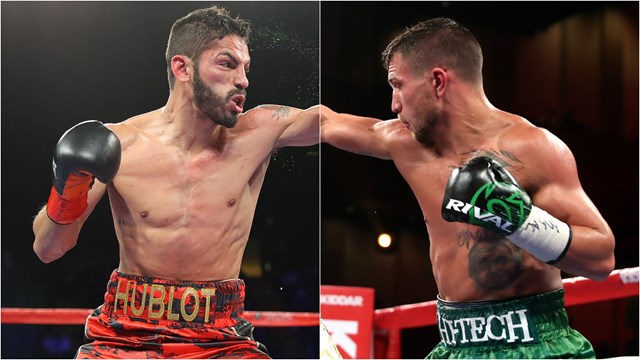 "Ask and you shall receive...let's do this at 135," Lomachenko posted on his Instagram in response to Linares' recent comments. "I’ll be patiently waiting for you to decide if you truly want this or not."

"You tell me when and where and the 135lb crown will be waiting," the Venezuelan replied as a comment on the post.

He then posted an image of his celebration after beating Mercito Gesta at the weekend.

"The King Jorge is waiting for you at 135. Your dad named you right, because you are vaSilly for wanting this fight," he joked.

Lomachenko has shown a desire to take on the very best of the lower weight classes. He had hoped to secure a unification at Super-Featherweight but looks set to move up again instead.

Last week Linares stated that he would agree to the fight, so fans will be hoping this mouth-watering match-up can be made soon.

BoxingScene.com spoke with Lomachenko's promoter, Bob Arum of Top Rank, earlier this week, and the veteran promoter was fully on board to do the fight on a date in April or May - depending on when Linares is physically ready to fight.

I think that you are right, Top Rank does have the best MatchMakers in the business as in Bruce Trampler somepne who'm I have known since about 40 years ago when he was pushing boxing tickets in Houston. They know…

[QUOTE=Gillie;18454001]U cannot be serious if u are suggesting Crawford avoided Garcia by leaving the division once Mikey got there? Bro, Crawford would school Garcia from pillar to post. Don't get me wrong, Garcia is a terrific fighter but he isn't…

[QUOTE=Dr.Cool;18451486]Mikey has paid attention to boxing for the last 30 years. Ok, Arum literally let Floyd "Money" Mayweather leave because Arum refused to make a fight with ODLH, because ODLH left him. He lied numerous times to prevent Pac from…

[QUOTE=AdonisCreed;18451135]Take notes Keith Thurman!! I'm not a Loma fan but he's showing some courage!! Moving up and taking on challenges. That's what you do when you want to stay at the top.[/QUOTE] Just curious why u aren't a Loma fan?…

[QUOTE=j.razor;18452489]Cuz you got idiots like fat dan rafael saying loma could beat "Pretty Boy" at 130. SMDH....that's how sh*t gets spoiled.[/QUOTE] Not only Loma will beat “Pretty Boy”, he will embarrass him. If you want to see how that fight…