Lomachenko dropped Pedraza twice in the 11th round and convincingly beat him on all three scorecards in their 12-round, 135-pound title unification fight in The Theater at Madison Square Garden. Nevertheless, the WBA/WBO lightweight champion came away from their tactical battle convinced that the version of Pedraza he encountered would’ve defeated Gervonta Davis.

Baltimore’s Davis (20-0, 19 KOs) dropped and stopped Puerto Rico’s Pedraza (25-2, 12 KOs) to win the IBF junior lightweight title from him nearly two years ago in Brooklyn. Ukraine’s Lomachenko (12-1, 9 KOs) suggested during an interview that aired Monday night on SiriusXM Satellite Radio that Pedraza’s physical condition cost him when Davis defeated him by seventh-round technical knockout in January 2017 at Barclays Center. 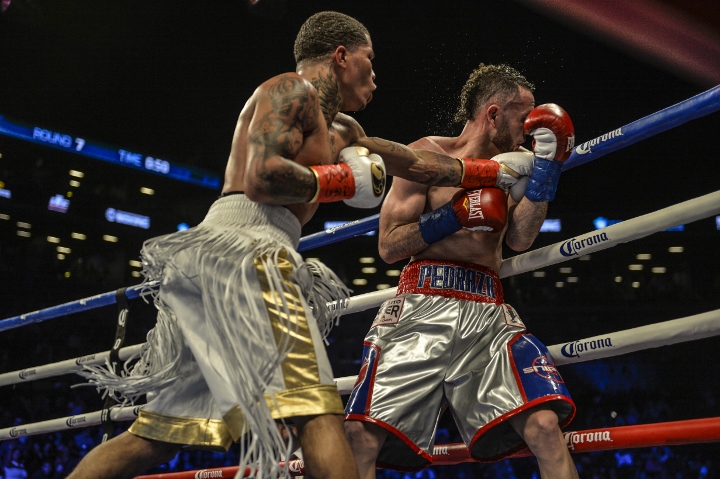 “I think we can’t compare me, Pedraza and Gervonta Davis-Pedraza, because it was [a] different weight class,” Lomachenko told co-hosts Randy Gordon and Gerry Cooney during the most recent installment of “At the Fights,” which airs live on Monday nights and Friday nights. “Gervonta Davis fought with him in 130 and nobody knows how can make weight, Pedraza, in 130. We don’t know his physical condition on that fight. We don’t know how he’s prepared for a fight with Gervonta Davis. But, as you see, for a fight with me, he prepared very good. He was ready. He was ready. So it was very interesting, good.”

“I think. I think. I think,” Lomachenko said. “Because, because on that fight with me, Pedraza was very focused all fight. All fight, he was very focused. In the fight with Gervonta Davis, he lose physical condition, yeah, he lose his breath and I think he believed in what he can make a strong punch for Gervonta Davis. And he forget about his defense.”

An incredulous Davis reacted as you might expect when he learned what Lomachenko said.

He retweeted a photo of Lomachenko, Gordon and Cooney to his 116,000 followers, along with a message that read, “Now Pedraza didn’t train for me?” Ten emojis of laughing faces and one of a man facepalming himself accompanied Davis’ message.

[QUOTE=PrBoxing88;19347050]Why teofino lopez dont fight Subriel Matias hahaha, i want to see how good he is. Btw Matias would beat him REALLY REALLY BAD.[/QUOTE]Teofimo Lopez’s ‘Takeover’ continues [B]December 18, 2018:[/B] I played fantasy matchmaker: What about Lopez vs. Devin Haney…

[QUOTE=The Big Dunn;19346594]I know Lopez father wants the Loma fight really badly. Lopez can hit hard so he'd have a chance against Loma but IMO if they fought in 2019 it would be like Charlo/Lubin where the young guy just…

[QUOTE=daggum;19348528]who cares davis is a ducking coward who refused to fight loma. why would he give him props in any way? the only reason davis is still relevant is because he didnt fight loma and chose the safe path fighting…