The only boxing show to out-draw Lomachenko-Pedraza in terms of ratings in 2018 was headlined by Terence Crawford and Jose Benavidez Jr. That two-bout broadcast, in which the unbeaten WBO welterweight champion stopped Benavidez in the 12th round, drew a peak audience of 2,800,000 and averaged 2,245,000 viewers October 13 from CHI Health Center in Omaha, Nebraska, Crawford’s hometown. 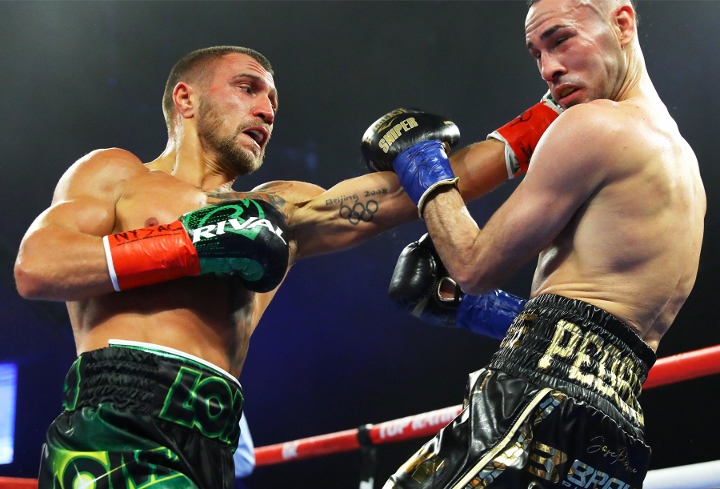 The precise peak viewership for the Lomachenko-Pedraza was not yet available late Tuesday afternoon, but it went over 2,100,000 viewers at some point during the course of Lomachenko’s victory.

The average viewership for Lomachenko-Pedraza was higher, too, than that of six of the seven NBA games broadcast on basic cable last week. The only NBA matchup that averaged more viewers throughout its duration than the entire Lomachenko-Pedraza telecast was the Golden State-Milwaukee game, which averaged 2,021,000 viewers Friday night.

Lomachenko-Pedraza was No. 2 as well in terms of overall viewership on all of cable television Saturday among males ages 18-34, 18-49 and 25-54, demographics coveted by advertisers. That No. 2 ranking includes all sports and non-sports programming on basic and premium cable.

Like the Crawford-Benevidez broadcast, which was preceded by top-ranked Alabama’s victory over Missouri, Lomachenko-Pedraza benefited from a strong college football lead-in.

The Heisman Trophy show, in which Oklahoma quarterback Kyler Murray beat out two other finalists for the award, aired live from Manhattan’s PlayStation Theater in the hour before ESPN’s boxing broadcast began with Lopez’s spectacular knockout of Menard. The Heisman show averaged 2,928,000 viewers.

[QUOTE=Redd Foxx;19348942]Something people outside the US don't understand is that the US doesn't have national heroes like almost all other countries do. That's just not in fashion here anymore. Americans really don't care where a fighter is from. In some…

[QUOTE=kafkod;19348849]They are good numbers, relative to the current popularity of boxing in the US, and it's also good that they were achieved by the top 2 P4P fighters in the world. But to put these numbers in perspective - Usyk…

[QUOTE=kafkod;19348849]They are good numbers, relative to the current popularity of boxing in the US, and it's also good that they were achieved by the top 2 P4P fighters in the world. But to put these numbers in perspective - Usyk…