The phrase “let’s go champ!” will likely be uttered more times leading up to the rematch between Logan Paul and KSI than the total number of combined punches thrown between both fighters in their fight on Nov. 9 in Los Angeles.

That’s because Shannon Briggs, the former heavyweight champion, will be belching his eponymous phrase as he gets his pupil Paul ramped up for his fight.

Paul, the YouTuber-turned-fighter, said the Brooklyn-born heavyweight who amassed a 60-6-1 record with 53 KOs, is teaching him how to tap into skills he didn’t know he had as his head trainer.

“We brought him into camp so he can transfer his 35 years of boxing knowledge to me,” Paul told the assembled media in Los Angeles. “Every day he teaches me more and more on what it means to be a professional fighter, and a cold-hearted killer. That’s what I’m becoming. This is no longer a joke.” 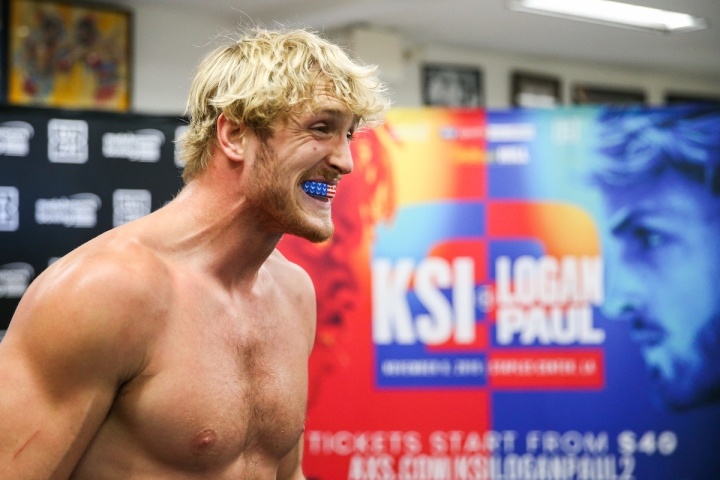 Paul fought to a majority draw with KSI in 2018 in front of 15,000 fans in London. He said the magnitude of the event zapped some of his energy, and he faded a bit down the stretch because of it during the course of their six-round fight.

“I’m absolutely working on my conditioning. That’s of No. 1 importance for us,” said Paul. “Everyone knows KSI is not a better fighter than me. I got tired. 15,000 people were watching my first fight. The f***? Who does that? That’s unheard. I got gassed. The adrenaline was sucked out of me by the third round.”

Their first fight was fought under amateur rules, and the second installment will be under professional rules with no headgear.

“The outcome is going to be way different. I will not leave it to the judges. I will give it under two rounds,” said Paul. “Knockouts and unconsciousness [is what I’m going for]. It’s hard with headgear. I got a lot of good shots last time, but the head gear protected him. I have a chin. Don’t worry about that. It doesn’t matter. I’m slick. I’m fast. I can’t ruin my face. I’m too pretty to fight this guy.”

Paul quickly changed his tone and acknowledged the seriousness and severity of the sport, and the risk he’s getting ready to take as Briggs watches with a careful eye.

“This is one of the most dangerous things that creators could do. We are entering the realm of professional boxing. People die in this sport. This is a dangerous sport,” said Paul.

“I’m not going to war without my weapons, and getting those weapons takes dedication and passion. I don’t think the average creator could do that. Maybe my screws are loose, but I have my reasons. It may not be the best way to settle disputes, but I just happen to hate the kid.”