Logan Paul: Boxing Could Be Fiscal Pass For Rest of My Life

LOS ANGELES—Logan Paul has graduated from filling the Manchester Arena in Manchester with 20,000 fans in his amateur debut to being tasked with selling out Staples Center this Saturday in Los Angeles ahead of his rematch with KSI.

The YouTuber will be making his professional debut on DAZN, superseding the likes of world champions like Devin Haney and Billy Joe Saunders. Depending on how well he performs, Paul could be in the sport for the long haul.

“If we do what we plan to do with it, this will be the fiscal pass for the rest of my life. It might be the [best financial move I have made in my life],” Paul told BoxingScene.com in an interview. “I started boxing a year and a half ago. I’m still new to this. I fell in love with combat sports quickly. I can’t play basketball. I can’t play tennis. In football, my coach called me the most unathletic, athletic kid he’s ever seen.” 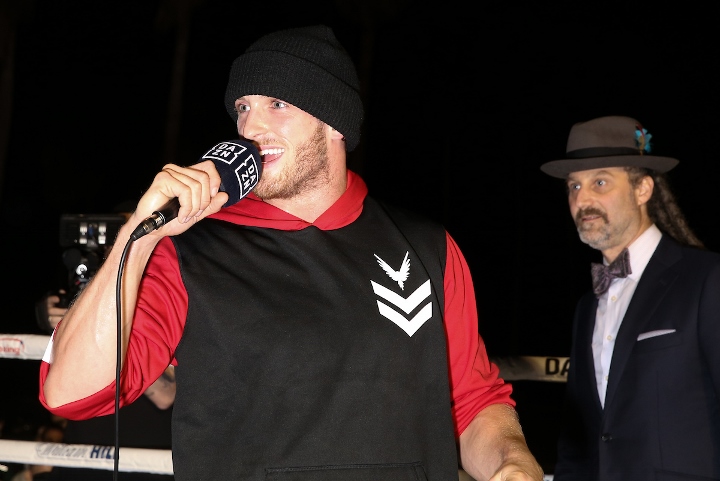 Paul, who has tapped former heavyweight champion Shannon Briggs for tutelage and coaching, said he will walk into the ring feeling more prepared than his first fight with KSI last year that finished in a majority draw.

“It wasn’t a conditioning thing in the first fight, it was a nerves thing. It was my first fight in front of 15,000 people. That is the dumbest thing I have ever heard in my life. Although it didn’t register consciously, it got to me. My energy was sucked in the locker room, and before we even left to the venue in my house. I had nothing left to give by the third round,” said Paul.

Paul, who was also a wrestler during his school years, didn’t have a fighting background till he picked a fight with KSI. He’s learned since that anytime he steps in a gym, he has a target on his back.

“Everyone in boxing has the biggest … in the world. Everyone wants to beat up the YouTube guy. Every time after we spar, they go, what happened to YouTube. That was the old me,” said Paul. “We’re more strategic now. For the last fight, we went as hard as we could. This time, it’s extremely regimented, planned out and agenda driven.”

Should Paul proceed to pull away with a win, his boxing agenda will become more focused, looking to contemplate trading cameras and content for a pair of gloves instead.

[QUOTE=Cadet Bonespurs;20179983]Unless he fights a legitimate boxer he cannot pass himself as a professional, no matter if he has a license to box. This is a sideshow, money grab, nothing more. Reminds me of Mickey Roark’s farce of a career[/QUOTE]…

This is a disgrace to boxing and to the POOR up and coming guys not getting paid anywhere near that much money.

[QUOTE=rob g;20179925]I’m hearing KSI and Logan Paul are making $900k each for this fight. It’s justified. They’re megastars. Eddie Hearn will make his money back on this fight and then some. As far as I’m concerned you get paid what…

[QUOTE=rob g;20179925]I’m hearing KSI and Logan Paul are making $900k each for this fight. It’s justified. They’re megastars. Eddie Hearn will make his money back on this fight and then some. As far as I’m concerned you get paid what…