Lightweights Must Fight Their Way To Greatness

It will be 40 years ago in July since the late Matthew Saad Muhammad and perineal title challenger Yaqui Lopez shared 14 wild rounds in New Jersey’s Playboy Club.

For many, it was 1980’s Fight of the Year. The always miraculous Saad was being swarmed in round eight, taking a beating and being leathered by every shot in the brilliant Lopez’s arsenal. But by the time the decisive 14th round started, Lopez was spent and Saad fired home the winning blows, dropping Yaqui four times before referee Waldemar Schmidt called it off.

It was arguably the violent highlight of a brutal time for the 175lbs division, a powder keg weight class with dangermen from around the world and so much talent that a top 10 couldn’t contain all of the big names and the world class fighters. Saad and Lopez were but two. In that mix you’d add England’s John Conteh, Argentine Victor Galindez, Brooklyn’s Eddie Mustafa Muhammad, Philly-born Mike Rossman, Marvin Johnson from Indianapolis, the ‘Camden Buzzsaw’ Dwight Muhammad Qawi, 1976 Olympian Michael Spinks, Yugoslav Olympian Mate Parlov, Rahway inmate James Scott and Jerry Martin. There were others, too.

It was 40 years ago next week that Martin visited the prison in New Jersey where he defeated Scott in an upset. A month later, Galindez’s Hall of Fame career came to an end when he lost on points to Jesse Burnett in an eliminator for the newly-created WBC cruiserweight title. Also in 1980, Eddie Mustafa Muhammad stopped Marvin Johnson in 11 rounds and Spinks beat Lopez, astonishingly less than three months after he’d last that almighty war with Saad.

For the most part, they all fought one another. It’s why their generation is remembered fondly and respectfully as golden one; not only did they emerge together but they won and lost against each other. No one came out unscathed other than, one might contend, Spinks, who later made the jump to heavyweight having left 175lbs with his ‘0’ intact.

That undefeated record was brutally taken by a rampant 21-year-old named Mike Tyson who was having his 35th professional fight. It’s hard to imagine a 21-year-old prospect racking up 35 fights these days. Daniel Dubois is 22, for instance, and he’s 14-0. At 22, Tommy Hearns – having already levelled the fabulous Pipino Cuevas – was preparing to fight Sugar Ray Leonard for the first time.

Tyson also had Evander Holyfield, Lennox Lewis and Riddick Bowe in action in and around his era, while Hearns and Leonard were, depending on how you look at it, blessed or cursed to be on the scene with Marvin Hagler and Roberto Duran.

Greatness in boxing has only ever really been defined by greatness. It’s why fighters like Charley Burley, Cocoa Kid and Sam Langford have been condemned as historical footnotes to so many when they’re skills and talent had them on a par with the greats of their eras.

But nowadays, even before coronavirus, there are so many excuses for fighters to use not to take the contests fans want and crave. If fighters are on different networks, there’s a stumbling block. If fighters have different promoters, there’s another. If a fighter isn’t ’the A side’, you’ve got a third. It goes on. 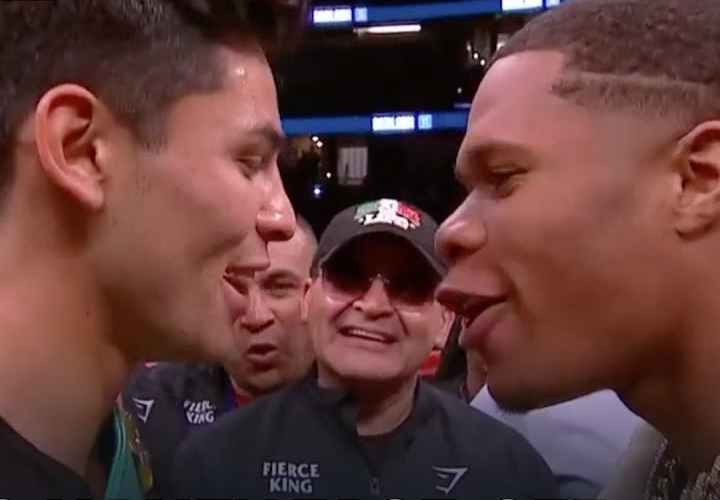 Via social media, they all make the right noises about fighting one another. They even mention the man who only needs to be called ‘Loma’, 32, on these pages.

This week Haney has called out Lopez, who returned fire calling him an ‘email champion’ (in reference to the WBC’s handling of him) while four-time champ Linares called Garcia – a social media Don – an ‘internet champion’. Meanwhile, Davis retweeted a picture of him and Garcia asking fans to pick a winner between them in a mythical match-up. “Who you got?” he asked.

By the way, Haney cut in on the beef between Linares and Garcia, interjecting, “If princess Ryan pussies out, I’ll fight you.”

The foreplay is all well and good but there’s yet to be a fighter whose solidified his Hall of Fame status on social media and no Hall of Fame fighter has made it to Canastota based on what he can negotiate. It’s only done in one place and it’s not done with talking.

This fabulous, gifted set of lightweights – which also includes Richard Commey, Luke Campbell, Robert Easter, Javier Fortuna and others, is a special crop that could turn into a generation of gold. But once the threat of Covid-19 dissipates deals are going to have to be done and some initial pride should be swallowed if the fights are going to be made. If they really want the bouts, they will have to instruct their promoters and networks to do the deals – unless they choose to use them as shields of convenience.

Forty years ago, Saad and Lopez didn’t hide from anything in their Fight of the Year.

A 22-year-old Tommy Hearns didn’t allow his fight with Leonard to ‘marinate’. Tyson the destroyer was hitting his peak at 21.

Saad Muhammad, Hearns and Tyson were all first-year Hall of Famers because they did it when and where it mattered.

Sure, times change but we shouldn’t have to hark back to the olden days for cases of the best fighting the best when we have a potentially incredible crop of 135-pounders who have the world at their feet and the capability of creating a truly special and memorable era for the sport.

This division is such a disappointment. I thought it'd be easier for Loma to get good fights at this weight, but here we are. I guess guys are just gonna catcall him from afar and then wait until he gets…

[quote=ibox4life;20566685]lomachenko vs lopez isn't happening per teofimo lopez yesterday. There are still international travel restrictions so lomachenko can't leave the ukraine. So now lopez and haney are acting like they will fight so we'll see.[/quote] the american is gonna ****ing…

[QUOTE=BoxingIsGreat;20565771]What great boxer has Loma fought at lightweight or anywhere? Linares?:lol1: What's his defining fight? Answer? None. So sad. By the way, all need to prove themselves, not just the lightweights.[/QUOTE] well great is subjective now isnt it? he's fought…

[QUOTE=JP Marra;20566297]There are only two lightweights currently that are willing to fight the best: Lomachenko Luke Campbell The rest are all talk and in it for the money, or street cred. Lomachenko would win this round robin easily, despite having…

[QUOTE=MinuteMaid5;20566052]I can't wait for Lopez vs Lomachenko, it will be a war for as long as it lasts.[/QUOTE] Lomachenko vs Lopez isn't happening per Teofimo Lopez yesterday. There are still international travel restrictions so Lomachenko can't leave the Ukraine. So…