A Life in Boxing Provides Much For Which To Be Thankful

It’s a tradition my wife and I started when our son, Ryan, now 11, was far younger.

Each night as we put him to bed, we’d have him list whatever good things had happened to him that day – whether at school, home or anywhere in between – as well as a few things for which he was thankful.

And though the answers to the latter question still tend to be the same a lot of days, we’d at least like to believe the nightly exchange gets him to take stock of the many good things in his life.

Here in the U.S., this is a week when many around him are doing the same thing.

So I figured it was as good a time as any for me to use my Tuesday space to follow suit.

Lest anyone be fooled by ornery Twitter posts from cranky writers late to the buffet line, the life of a boxing journalist – whether full-time, part-time or otherwise – is usually pretty damned good.

We have access to athletes with compelling stories, and we tend to get some of the best seats in the house when it comes time for them to ply their trade. And when there is an issue worthy of consternation in our realm, it tends not to rise to a level those in most professions would even notice.

Oh, and though it’s a fair bit short of a king’s ransom, we do get paid, too.

It’s a gig I longed for as a middle schooler, and even though I’ve since had my share of balky internet connections, gridlocked traffic and long nights on airport concourses, I’d not trade it for anything.

Toward that end… here are a few boxing-related things I’m forever thankful for:

Publicists, PR people and promotional personnel – OK, I’ll concede my heart doesn’t skip a beat at every opportunity offered to interview a 10-fight cruiserweight with an impossible-to-spell name, but the job these folks do in getting things arranged is beyond integral to what I do.

They spend time with fighters doing dozens of media calls a day, but somehow manage to keep things on course and get every one-on-one request handled. I try to say thank you in one way or another whenever possible, but for anyone I’ve ever missed, please know the respect and gratitude sent your direction is boundless.

The chance to travel across and outside the U.S. – Make no mistake, there are hundreds of writers whose frequent-flyer street cred far exceeds mine, but the idea that this middle-class, public-school kid from upstate New York has jetted to fights in multiple states and countries still makes the hair on my arms stand up. 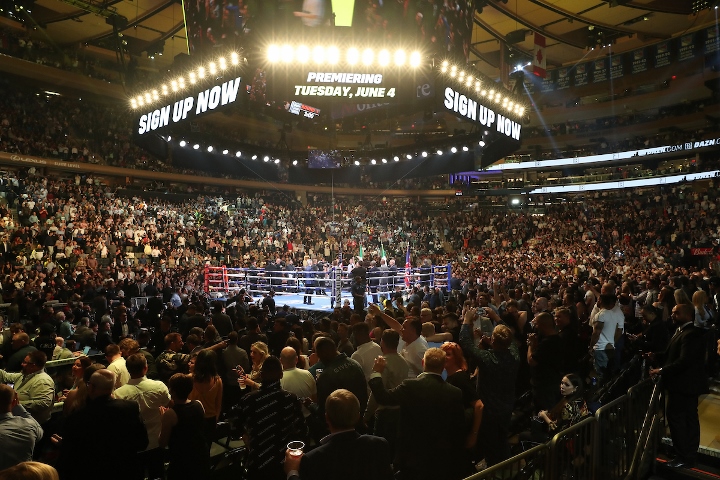 I’ve written about cards in three decades, took my dad to a show on what wound up his final birthday and have been privileged to represent publications/websites on live radio and TV and podcasts.

When I tell people I’ve lived my dream, I really do mean it.

I’ve interviewed my favorite fighter ever – That seventh-grader I referenced earlier was as big a Tommy Hearns fan as has ever existed on this planet. I saw his fights on TV, collected magazines with his posters and started my “career” with an English assignment about his first fight with Ray Leonard.

Still hard to comprehend that 24 years later I sat ringside, literally, next to the guy ringing the bell, as he made his final Detroit appearance at Cobo Arena. I sat down with Tommy before and after the fight, and I can only hope now that he couldn’t tell exactly how star-struck that 36-year-old was.

As good a role model as a guy could want – I was out in my garage over the weekend to dig out Christmas decorations when I happened a plastic tub I’d marked “Boxing Magazines.” And for the next two hours – amid occasional checks by my wife to make sure I’d not been kidnapped – I pored over the old copies that planted the writing seed long before I cashed a paycheck.

One of the names that appeared in nearly every publication was Randy Gordon, known better these days as the host of “At The Fights” on Sirius/XM with Gerry Cooney. I’ve been fortunate over the subsequent years to meet, interview and become friendly with him, and I can tell you first-hand that there’s no guy who works harder or who is more willing to spend time answering questions, providing career advice or just shooting the breeze about an upcoming weekend TV card.

I’ve spent a good portion of my life wanting to be the guy, and to discover that he’s an even better person in real life than I could have imagined has been a gigantic thrill.

I wish you all my kind of success… and a happy, wonderful Thanksgiving!

Vacant WBA “world” welterweight title – Monte Carlo, Monaco
Alexander Besputin (No. 1 WBA/No. 19 IWBR) vs. Radzhab Butaev (No. 2 WBA/Unranked IWBR)
Why it’s trash: The sanctioning bodies play recurring roles as the butts of well-deserved jokes. But once in a while even the WBA ups the ante. The idea that Besputin and Butaev can be ranked Nos. 1 and 2 in a glamour division like the 147-pounders is evidence of why they are boxing’s biggest punchlines. And if you regard these belt-seeking pretenders with anything beyond a snicker, you’re right alongside them.