Liam Smith: My Fight With Canelo is Easier Task Than Brook's Bout

LIAM SMITH hopes to have the ringside support of Steven Gerrard when he tries to pull off a shock against Saul ‘Canelo’ Alvarez on Saturday.

The Scouse scrapper defends his WBO world light-middleweight crown against the Mexican superstar at the 80,000-seater AT&T Stadium – home of NFL side Dallas Cowboys – in Texas.

Canelo which means cinnamon in Spanish and refers to the Mexican’s red hair, will be a big step up for Smith after two low-risk defences of his title. 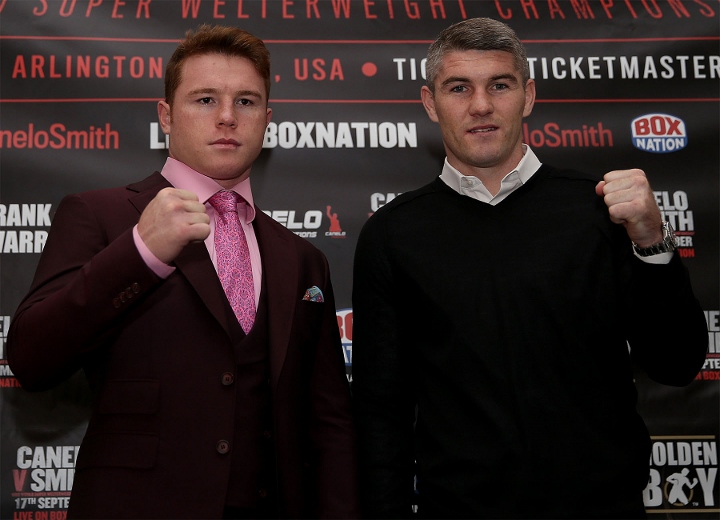 But Smith, 28, insists he is ready to upset the odds and hopes to be boosted by the support of ex-Liverpool and England midfielder Gerrard, who now plays for MLS side LA Galaxy.

Boxing fan Gerrard has been out of action since suffering a hamstring injury last month and Smith hopes it means he is able to make his fight.

He said: “Steven is supposed to be going to the fight and I’ve had a conversation with him about it and because of the injury he might be able to make it.

“He’s a big fan of boxing but he’s also a friend of the family and it would be great to have them there if he can make it but we will have to see.

“It’s a step up but I believe I’m ready for this fight. I’m not 32 or 33 years old and looking for a pay day before I get out of the game.

“I’m young and a champion and I’ve got something to lose. I didn’t have to fight Canelo, I chose to fight him and should be getting more money for it.

“But it’s not about the money, it’s about my chance to put myself up there and beat one of the biggest names in the sport.”

Smith – one of four boxing brothers – reckons fellow Brit Kell Brook had a tougher task late last night than he does next weekend.

The Sheffield fighter stepped up two weight divisions to take on world middleweight No.1 Gennady Golovkin at the O2 in London.

And Smith, who flew out to the US on Friday, insists he will not be daunted by the size of the occasion against Canelo, 26, whose only defeat came on points against the great Floyd Mayweather Jr three years ago.

“I know that I am solid enough to hold my own with any light middleweight in the world and I’ve really wanted this fight for a while. There will be thousands there to support Canelo but I won’t shrink on the night.

“The outcome will have nothing to do with the size of the occasion. Nothing gets to me in life. I will thrive on it. I sparred with Amir before he fought Canelo and it helped being around a big-fight atmosphere.

[QUOTE=HansGruber;17029965]no one respects piece of sh1t canelita not even his future opponent ROFL[/QUOTE] Ypur azz does

"I sparred with Amir"... lol hahaha ok that should really help

It is true that GGG would be a harder task than Canelo but the problem is that Liam Smith has not been tested and he is a world champion. Just think it is 2 or 3 levels above what he…

This will be a fun fight to watch, definitely. And I'm glad I'm reading and not trying to listen to what Smith has to say. Cuz I sure as he!! can't understand a damn thing he says. :lol1: