Sampson Lewkowicz has never been shy about aggressively matching his boxers. It’s what keeps him coming back to Showtime’s ShoBox circuit.

“Most of the boxers in our stable know when they sign with me, they are going to be put in tough fights,” Lewkowicz told BoxingScene.com while discussing Friday’s card, where his once-beaten welterweight Alberto Palmetta (12-1, 8KOs) faces undefeated Erick Vega Ortiz (16-0, 9KOs) in the main event at WinnVegas Casino in Sloan, Iowa (Showtime, 10:30pm ET/PT). “It’s important for them to know if they can fight before putting them in the big fights.”

This weekend’s card is similar to the last time Lewkowicz partnered with Paco Damian’s Paco Presents on the ShoBox circuit. A June show topped by unbeaten junior middleweight Sebastian Fortuna saw three bouts with the six participants boasting a combined record of 91-1. The latest entry sees six prospects on the lower end of the experience scale, but still amassing a combined 65-1 record, the lone loss claimed by Palmetta, a 2016 Argentina Olympian who has won six straight since a knockout loss two years ago.

“Alberto has been with me since his pro debut,” notes Lewkowicz. “He was captain of the 2016 Argentina Olympic team and I believe he can become a great pro. Even his loss, he was winning until he got cocky and he got caught.

“It taught him a lesson, but he also knew that the day would come when he gets a fight like this.” 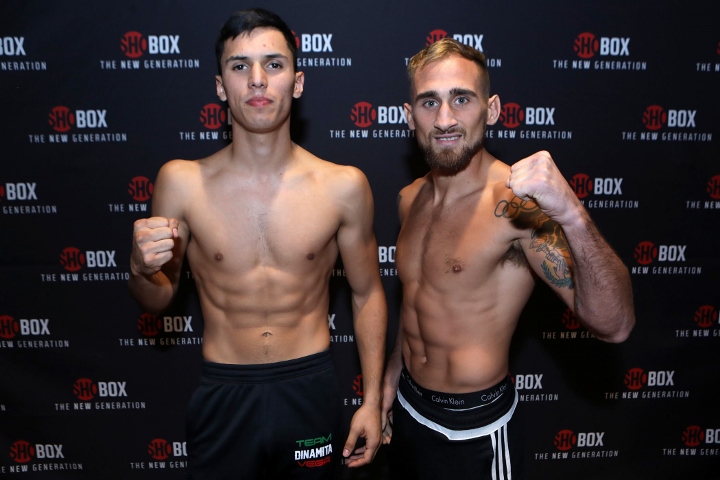 Vega also steps up in class, along with fighting outside of his native Mexico for the first time in his career. The 24-year old from Tijuana looks to pick up his fourth win of 2019, but—like Palmetta and everyone else on the card—will find out more about himself on Friday than at any other prior point in his career.

The same applies for each of the evening's supporting bouts on the telecast, both of which feature unbeaten boxers in each corner. Argentina's Marcus Escudero (10-0, 9KOs) faces Houston, Texas native Joseph George (9-0, 6KOs) in a scheduled 10--round super middleweight bout, while Uruguay's Amilcar Vidal (9-0, 8KOs) and El Paso's Zach Prieto (9-0, 7KOs) collide in an eight-round middleweight bout.

It’s not a path that a lot of boxers desire, but one that comes with the territory if you want to appear on this circuit.

“If you watch the fights on Friday, every one of those fights will be competitive, every one of those kids will be in tough, thanks to Shobox,” notes Lewkowicz. “I am very grateful to Gordon Hall (senior vice president of Showtime Sports, and creator and executive producer of ShoBox), he is one of the most knowledgeable people I have ever met. Some of these (executives) don't know boxing… he knows.

When will Benavidez be put in a tough fight.