The former heavyweight champion can’t help but think, though, that Joshua would’ve been better served by boxing Ruiz in England this time around. Lewis feels Joshua was out of sorts when Ruiz upset him six months ago in part because Joshua fought outside the United Kingdom for the first time that night.

The last thing Joshua needs, according to Lewis, is to try in another foreign environment to overcome all the mental and physical obstacles associated with a stunning, seventh-round technical-knockout defeat. Lewis believes England, where Joshua is most comfortable, would’ve been the right site for this immediate rematch.

“Especially how he lost, I think his promoter should’ve really brought that fight back to England – where his family is, where his crowd is, and build him back up that way,” Lewis told a group of reporters recently at MGM Grand. “Now, he’s basically brought him back to another foreign country, where he doesn’t know anybody, and he’s gonna be looking around like this [unfamiliar with his surroundings].” 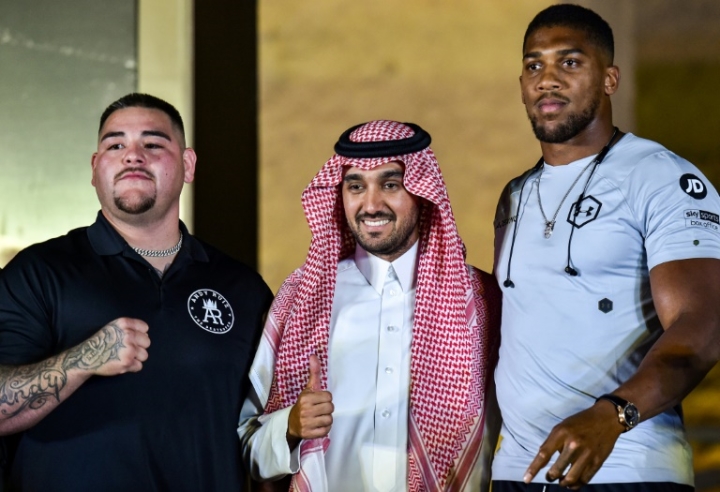 Eddie Hearn, Joshua’s promoter, has indicated that the offer to bring their rematch to Saudi Arabia simply was too lucrative to pass up.

The British superstar and Ruiz will meet a second time Saturday night at 15,000-seat Diriyah Arena in Diriyah, Saudi Arabia. That recently completed, outdoor venue was constructed specifically for this event.

Financial considerations notwithstanding, Lewis thinks fighting in Saudi Arabia is a disservice to Joshua.

“I don’t think an event should be an event just because it’s money,” Lewis said. “I think it should be better for your fighter. What’s the best place for your fighter to fight, so you can guarantee the win? When it’s against a lesser opponent, maybe you can bring it over and say, ‘Yeah, I’ll box this lesser opponent over there and beat him, and not have too much weight on my shoulders.’ Now he’s got a lot of weight on his shoulders and he’s got a lot to prove, a lot of pressure on him.”

Lewis realizes, of course, that Hearn has an obligation to make as much money as he can secure for everyone involved in the event.

“They box for different terms,” Lewis said, referring to Hearn and Joshua. “Eddie Hearn is there for the money. He’s trying to get the money. You know, I’m not saying he’s wrong. He’s a promoter. Promoters are trying to get the most money possible. But the promoter and the boxer are supposed to work hand in hand. And there’s a couple of promoters and boxers that work hand in hand.”

I always remember an interview with Hearn on YouTube after the $50m offer from Wilder. Hearn was adamant it wasn't realistic money unless they "whored Joshua out to the Arabs" guess what the hypocrite snake Hearn ends up doing?

Sorry but you Brits can't match the money of Other countries All fighters want to get paid like Mayweather Thsts not possible w out American interest Eddie blew that when he ran from Showtime To avoid Wilder 2 years ago...to…

[QUOTE=The Boston Hera;20226079]Hearn is getting the lions share of that 85 mill. That's why he made the match there. He doesn't give acwhizz about Joshua's needs or wants. IDIOT.[/QUOTE] Like you would know. You are a boxing fan who sits…

[QUOTE=_Rexy_;20225046]Oh another thread full of oblivious Hearniacs who think lennox lewis is jealous of a manufactured fraud.[/QUOTE] Well he did say AJ should put the fight in Mexico and Las Vegas when they was talking about putting it in the…

Did somebody buy Lennox an atlas for his Birthday? England is just the latest in line of locations Lewis feels this fight should of been held. FULL TIME SHILLER.