Although the promoter of Carl Frampton has denied it, Leo Santa Cruz and his handlers insist there in an immediate rematch clause in their fight contract. A source with knowledge of the bout agreement also advised BoxingScene.com that a rematch clause does exist.

This past Saturday night at the Barclays Center in Brooklyn, Frampton unanimously outpointed previously undefeated Santa Cruz to capture the WBA super featherweight title. Frampton, from Northern Ireland, improved to 23-0. Santa Cruz, from Mexico, dropped to 32-1-1. 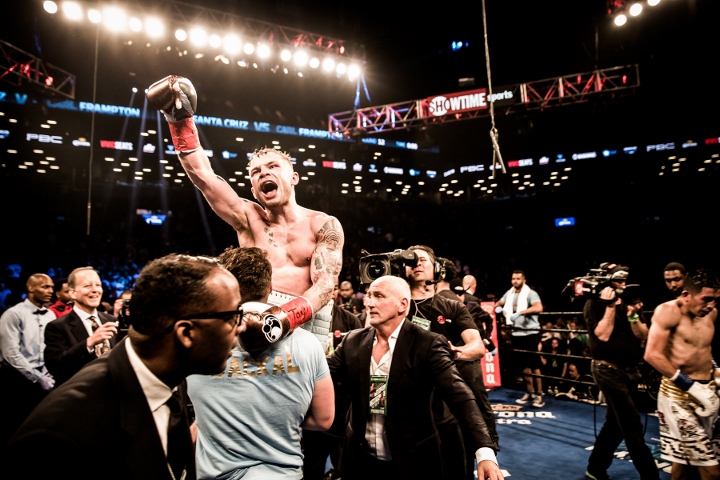 After the fight was over, McGuigan insisted that a rematch clause did not exist and their team began discussing possibilities for the future - like a unification with their domestic rival Lee Selby, who was ringside on Saturday and holds the IBF's featherweight world title.

Jose Santa Cruz, father and trainer of Leo, said they are going to speak with Al Haymon - adviser to both Santa Cruz and Frampton - and request an immediate rematch in November, in Los Angeles or Las Vegas.

"My son spoke with Mr. Al Haymon at the end of the the event and he said that there is a rematch clause. Of course we want to direct rematch, but now we could do in Los Angeles or Las Vegas,in about three more months in November. I'll tell you this - I did not see my son lose. If I had seen him lose I would have said it, so we want a rematch," Jose Santa Cruz told ESPN Deportes.

"A lot of people have told me that they saw Leo win. I think the judges should have rewarded the most offensive fighter. If Frampton connected with two, then my son landed three. I do not like making excuses, maybe they did beat us but I'm positive that Leo will have the title back."

Immediately after the fight with Selby, LSC can pack his bags for a trip to the UK! In the meantime, LSC vs. Gary Russell Jr. is a great fight for Las Vegas!

[QUOTE=MindGame;16919486]Santa Cruz lost the belt, say Hasta La Vista to LA !!! Pack your bags, you're going to Belfast or Dublin, Ireland! !!! That's if you can get the rematch because Selby will make big Al more $$$ than a…

There is no rematch clause. Frampton is not fighting him next, cruz is so bitter lol

Frampton beats him more easily the second time around... if comes to fruition, hope the rematch in Ireland to stick it to leo and his ***** ass complaining about the demographics of the crowd...