Leo: I Was Ready For Fulton This Week; I'll Be Ready For Him In 180 Days Or Less

Angelo Leo deservedly will take some time to celebrate his career-changing victory over Tramaine Williams on Saturday night.

Leo looks forward, though, to having his fight against Stephen Fulton rescheduled as soon as possible. They’re expected to fight next for the WBO junior featherweight title Leo won by battering Williams to the body and winning a 12-round unanimous decision Saturday night at Mohegan Sun Arena in Uncasville, Connecticut.

The WBO is expected to order the 26-year-old Leo (20-0, 9 KOs) to make his first defense of that title against Fulton within 180 days of Saturday night.

“They said to make it [within] 180 days,” Leo said during a virtual post-fight press conference Saturday night. “I believe that’s six months. And I’m ready. I was ready for him this week, and I’ll be ready for him in 180 days or less. You know, the fans want it, I want it, he wants it. Why not make it happen, you know?” 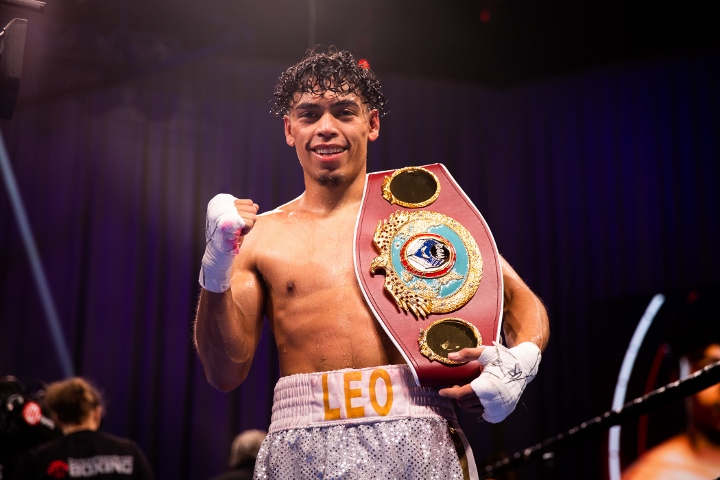 The previously unbeaten Williams, who is ranked sixth by the WBO, replaced Fulton as Leo’s opponent Wednesday, when Fulton tested positive for COVID-19.

The 26-year-old Fulton (18-0, 8 KOs), who has been quarantined while he recovers, watched the Leo-Williams fight from his home Saturday night. The WBO’s number one-ranked 122-pound contender was shown during Showtime’s telecast and acknowledged his readiness to fight Leo next.

Whenever Leo and Fulton fight, Fulton will have to find a way to neutralize the relentless Leo’s body attack. The Albuquerque, New Mexico, native wore down Williams with body shots and won by big margins on all three scorecards in Showtime’s main event.

Williams (19-1, 6 KOs, 1 NC), a southpaw from New Haven, Connecticut, started strong in the first two rounds, when he repeatedly hit Leo with straight left hands. Leo made defensive adjustments and by the fourth round began breaking down Williams to the body.

“I felt him slowing down in the middle rounds,” Leo said. “He was kind of getting repetitive in his punches. I caught on to his timing, and once I caught on to his timing, you know, he was all mine. … I did feel like he was wearing down. But then again, you know, he hid it really well. I couldn’t really tell when he was hurt. I did hear him sometimes when I hit him with body shots, he was grunting and all that. So, I knew to keep going to the body. But, you know, Tramaine is a tough competitor for sure. He’s not 19-0 for no reason.”

lol he'll be ready in 180 days. That's six months. Anybody think it gets done in that time frame. Nah. Boxing move so slow zzzz

I was really looking forward to this fight and am even more now. Leo is relentless and dog, but I think Fulton has the skills and ring generalship to keep from getting dragged into a war of attrition. Looking forward…

Fulton has decent skills but no pop. Should be an interesting fight.

Wish it was Rigo vs. Fulton!

I give Leo a solid chance, he’s relentless and used his size well but Fulton knows how to use the ring and has different sets of feints and sets traps! Leo is gonna have to do less lunging and more…