Lee Selby: I Hope The Ricky Burns Fight Brings Out Best in Me

The Welshman’s first foray at 135lbs, nine pounds north of his former fighting weight, came against Omar Douglas at the same venue back in February. A unanimous decision victory against the American was overshadowed by cuts above both eyes to Selby and didn’t show the threat that he believes he can deliver to his new rivals. 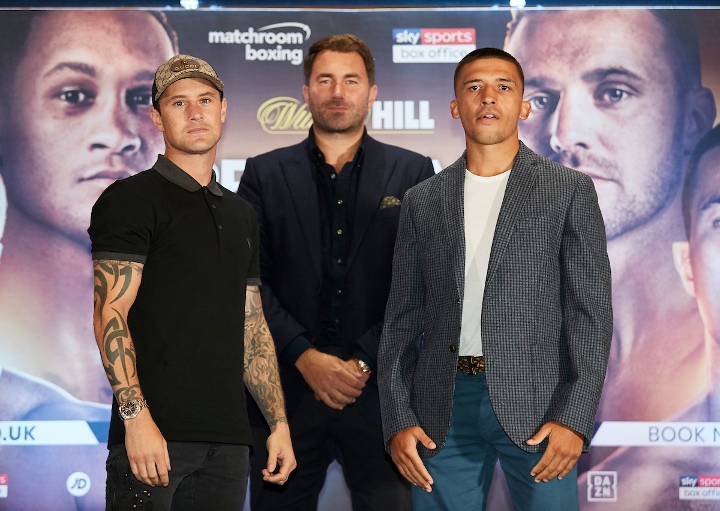 A win against Burns, for the IBF’s number four ranked contender, may lead to a final eliminator at the end of 2019 greatly improving his chances of a second world title shot moving into 2020.

“That’s the plan,” Selby said, in his usual matter of fact manner, to Boxing Scene.

The 32-year-old is full of respect for his Scottish opponent and is fully aware of what the 36-year-old will bring to their fight later this month.

“There’s no stopping Ricky Burns. He’s an extremely tough man. I think I’m tough myself. It’s a 12 round fight. Neither of us are massive punchers. It’s more likely to go the distance but anything can happen: break your arm, ribs… anything.”

The pair, as has now been well documented, sparred one another in Scotland five years ago. It was a time when Burns was WBO Lightweight world champion and Selby was over a year away from beating Evgeny Gradovich, again at the O2 Arena, to become world champion at 126lbs.

Since then world title fights have come and gone for both men. Burns has suffered five defeats to good opposition while Selby came unstuck against Yorkshire terrier Josh Warrington, losing his world title at Elland Road, Leeds to the Englishman in May last year. Selby, who lost his mother, one year earlier, dismissed any notion that the defeat to Warrington - after a long-term rivalry - affected him greatly.

“I can get over anything,” he said.

“There’s a lot more (people) worse off when you think of how bad you are doing. Losing a fight ain’t nothing. There’s people with no food and no roof over their head. That’s a loss, that’s struggling. Losing a fight is nothing compared to people like that.”

Selby, however, is better off getting to fight heavier and healthier than he’s used to. His size and frame often prompted onlookers into wondering how he could make the 126lb limit for several years. The laid back Selby opened up to ‘Scene about the rigours and demands of the weight making which played its part physically during the five defences of his world title.

“Early on in training I’d be on 1200 calories a day. Three sessions, six days a week and one of them sessions I burned 1000 calories on a cross-trainer for an hour. Then I’d do another two sessions on an empty tank. And then the closer the fight comes the less I’m eating. The week of the fight it was lettuce leaves, chewed up food then spitting that out.”

‘Scene asked Selby how he managed to put himself through through such an ordeal for so long.

“Just mental toughness, determination and the will to win,” he answered. “It was like a fight to me. My trainer, my manager, no-one knew what I was doing. I just had to keep a straight face and get on with it and make the weight. If I didn’t make the weight I lost the fight, that’s how I saw it. I didn’t complain once, I just got on with it. And if anyone asked me I’d tell them I do the weight easily. I didn’t want to give in and for people to know that I was struggling.”

Selby described his loss to Josh Warrington as “upsetting” but a “relief” at the same time and admitted that had he not been world champion then he would have moved up well before he eventually chose to.

“I can have milk in my coffee now,” Selby laughed when discussing the benefits of being at lightweight.

“I’m fit and strong and I don’t lose as much power. Hopefully this fight will bring out the best in me.”

Selby now finds himself in a division where one man, Vasiliy Lomachenko, rules as king and the rest of the pack continue to chase, claw and scratch their way up the mountain in a bid to topple him. The most recent attempt came from Luke Campbell at the end of August. The 2012 Olympic Gold Medallist at 56kg came up short against the dazzling Ukrainian despite his best efforts which culminated in ‘Loma’ being pushed more than usual in the ring and forced to fight more than he is used to.

“A lot of people wrote Campbell off in that fight,” said Selby who watched the fight as a keen observer.

“He (Campbell) was a top amateur, so was Lomachenko, I thought it would be more like a top class amateur fight rather than a professional fight. Early on Lomachenko didn’t really throw a punch. He was using the jab to find his range, he likes to use his feet to measure his range and distance before throwing. I thought it was a good fight and they both gave a great account of themselves.”

Be nice to see the winner fight Devon Haney in the UK.