Lee Selby believes experience will be key when he faces the unbeaten George Kambosos Jr on May 9.

Selby, along with fighters from the undercard including Joe Cordina, James Tennyson and Chris Billam-Smith were in attendance for Tuesday’s press conference in Cardiff for the Matchroom Boxing card at the Welsh capital’s Motorpoint Arena.

Selby, 33, will be boxing in front of his home support for the first time in six years as the former IBF featherweight champion looks to book his spot as mandatory challenger for the IBF lightweight title currently held by Teofimo Lopez. 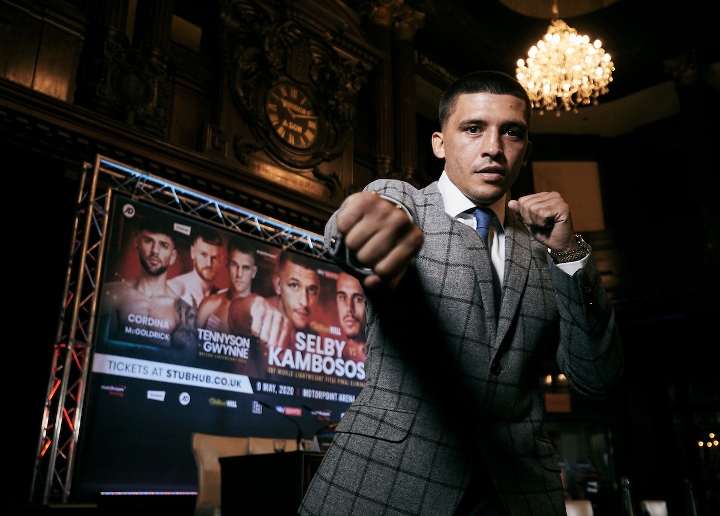 With Eddie Hearn on hand to ask the questions, the Matchroom promoter described Kambosos Jr as fearless and asked Selby if experience would play a key part in their fight.

“That’s one thing I have got over George Kambosos is experience,” Selby answered. “He’s had 18 fights, I’ve maybe had 17-18 title fights so I have a wealth of experience. I’ve had six world title fights so that’s what I’m hoping to bring into the fight and I’m hoping that’s going to help me win.

“I’ve got a tough task ahead of me,” Selby said. “George Kambosos is a very good fighter. He can punch, he can box, he’s a pressure fighter. I think he’s the seventh unbeaten boxer I’ve boxed in my career and the third Australian. One Australian, Joel Brunker, I boxed him for a final eliminator for the IBF featherweight title so it’s a similar scenario. I’ve shared the ring with Kambosos in the Wildcard in Los Angeles [and] sparred a few rounds. He’s a good fighter but in those rounds I took enough to know what I’ve got to do in the fight to beat him.”

A win for Selby against Kambosos Jr. would line him up for a shot at the winner of Vasiliy Lomachenko against Teofimo Lopez, although their much anticipated lightweight unification is still to be announced. Should Selby secure a fight against the winner he is well aware of what his status would be going into the fight.

“That’d be a massive fight. I know I’d be a big underdog against each of those fighters but I believe I’ve got it in me to beat anybody. If I can box to the best of my ability on the night I think I can hold my own with anyone.”

User Comments and Feedback
ADD COMMENT VIEW COMMENTS (0)
Advertisement
Top Headlines Gervonta Davis-Leo Santa Cruz - LIVE Results From Alamodome Inoue 'Shivers' Thinking Back To Broken Orbital Bone, Double Vision Versus Donaire Savannah Marshall Beats Down, Stops Hannah Rankin For WBO Title Lee Selby vs. George Kambosos - LIVE BoxingScene Scorecard Murat Gassiev Crushes Nuri Seferi in One Round Tommy McCarthy Edges Bilal Laggoune To Capture EBU Title Gervonta Davis Will Show Off Boxing Abilities vs. Leo Santa Cruz, Ellerbe Says Heraldez: Prograis Knows I Can Box, Punch, Something That He's Not Ready For Moloney: This Is My Destiny; I've Got What It Takes To Beat Inoue Wilder Claims Fury Loaded Gloves, Demands He Honor Contract Arum: Mayer's Gonna Be A Great 'Champeen' And A Great Credit To Women's Boxing Mario Barrios: I Gassed Out Against Akhmedov; I'd Gladly Give Him A Rematch Santa Cruz: I'll Probably Wanna Go Out There & Brawl With Davis, Make It A War Inoue: Casimero Has One-Punch Knockout Power, But He Has A Lot Of Weaknesses Moloney: I Will KO Inoue, Come Out As The Next Superstar In The Sport Daily Bread Mailbag: Lopez, Loma's Loss, Shields, Wilder, More Gervonta Davis Will Be A PPV Attraction Moving Forward, Ellerbe Says Prograis: Me & Teofimo Lopez Would Be A Very Explosive Fight; Let's Do It! Chisora: I Have To Go To Usyk, I'm Going To Go To War! Savannah Marshall: The Lockdown Has Been Brilliant For Females Michel Rivera Believes His Speed, Power, Pressure Will Get Him Past Miller Jason Moloney: A Year That Could've Been Devastating Has Been Exact Opposite For Me Regis Prograis on His Comeback Against Juan Heraldez Inoue: A Lot of Expectations Of Me, I Want To Be Able To Live Up To Them Heavyweight Avalanche Starts With Usyk-Chisora Michel Rivera Believes Davis' Abilities Will Be Too Much For Santa Cruz Haye: You Saw Lopez-Loma? Chisora Will Do Same To Usyk! Jaime Munguia Fights Through Fire, Stops Johnson in Six Due To Severe Cut Dave Allen Gutted Over Fight Falling Out, To Return in Coming Months Jaime Munguia vs. Tureano Johnson - LIVE BoxingScene Scorecard Rashidi Ellis Stays Unbeaten, Decisions Alexis Rocha Elwin Soto Boxes Past Carlos Buitrago To Retain Title Devin Haney: I Have a Goal To Be The First Billionaire Boxer! Marlen Esparza Decisions Sulem Urbina Over Eight Rashid Kodzoev Takes Out Tamas Lodi in Five Rounds in Minsk Naoya Inoue, Jason Moloney - Set For Las Vegas Showdown Barrios vs. Karl, Magdaleno vs. Cruz - Weights Ewa Brodnicka Misses Weight, Title Only At Stake For Mikaela Mayer Regis Prograis, Juan Heraldez - Set For Battle Gervonta Davis, Leo Santa Cruz - Ready For War in Texas
Advertisement
Latest Boxing Videos 'The Journey - Charlo Doubleheader' 30 Minute Special Showtime Releases Trailer For Documentary 'Ringside' Charles Martin Reacts To Helenius Stopping Kownacki Robert Helenius Reacts To Shocking TKO of Kownacki Adam Kownacki Reacts To TKO Defeat To Helenius Joseph Parker Reflects on Fury-Wilder, Talks Return Mikey Garcia Reflects on Fury-Wilder, Talks Vargas Eddie Hearn Reflects on Fury Stopping Wilder, More Kenny Porter Reacts To Tyson Fury Stopping Wilder Jose Ramirez Reacts To Tyson Fury Stopping Wilder
Recent Top Stories Jaime Munguia Fights Through Fire, Stops Johnson in Six Due To Severe Cut Will Fighting Leo Santa Cruz At 130 Pounds Be Worth The Weight For Gervonta Davis? Naoya Inoue - The Run, In Progress Gervonta Davis Following in The Footsteps of The PPV King
Advertisement
Latest Forum Threads
Advertisement
Advertisement
This website may contain adult language.
TM & © 2020 BoxingScene. All Rights Reserved.