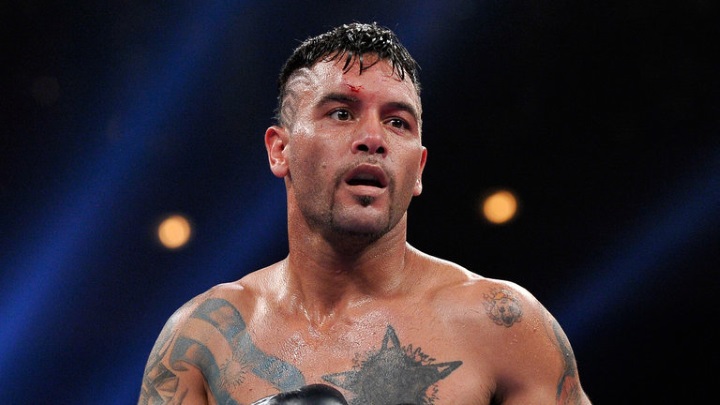 It wasn't easy but at the end of the day WBC #10 and IBF/WBO #14 rated super featherweight Mukhammadkhuja Yakubov (15-0, 9 KOs) had something to celebrate as he retained his WBC International title for the second time against determined and durable but outclassed Mexican Abraham Montoya (18-2-1, 13 KOs) over twelve grueling rounds.

Montoya was a relatively late sub for the previous opponent but came in with grit and determination to upset the native of Isfara, Tajikistan. Yakubov soon found the Mexican national champion had some solid power in his punches. Yakubov,  24, however, had Plan B, and that was to box, not to rumble. Showing fine lateral movement, adding upper body movement to the mix as well, Yakubov controlled the distance, landed flush hooks and popped out as soon as Montoya tried to rumble in with his own power. Montoya, though physically strong, was slow in his feet, finding it's hard to catch the Tajik cleanly. Yakubov, meanwhile, was light on his feet and never in danger, showing nice boxing potential. He was a bit off the target too, as he landed several times below the beltline, finally being deducted a point by referee Daniel Van de Wiele of Belgium in round five. Otherwise, it was a solid technical performance for a technically sound operator, albeit with limited firepower.

All three judges had it for Mukhammadkhuja Yakubov with identical scores: 118-10

Although clearly not Vasiliy Levit, who was controversially decisioned by Tischenko in the finals of 2016 Rio Olympics, Akberbayev, 35, was expected to give fits to his opponent. But Tischenko, a lanky (6'5'') southpaw, was all wrong for him. Akberbayev fount it difficult to find his distance, something the Olympic champion was doing with ease. Tischnko's jab controlled the tempo and range of the fight, while stinging left hands annoyed and discouraged the Kazakh import. Akberbayev was dropped in the fifth round for a moment and given virtually no chance to respond in style. After staying for one more round at the end of Tischenko's punches, Akberbayev's corner retired for good. Tischenko, 28, not a thriller to watch but still dangerous, retained his WBO I/C cruiserweight title for the first time.
The cross-roader between two local super featherweights, going (presumably) into different directions, ended in a minor sensation, as Mark "Canelo" Urvanov (17-2-1, 9 KOs) got the biggest win of his career by stopping former WBO world title challenger Evgueny "Happy Gilmore" Chuprakov (21-2, 11 KOs) in three rounds.

Urvanov, 23, had some success in his latest fights, while Chuprakov, six years his senior, was coming off the TKO victory following a TKO stoppage to Masayuki Ito on this New Year's eve. Both combatants fought cautiously for the first two rounds, but Chuprakov, once a bright move-and-sticker with good footwork, showed diminished reflexes against previously stiff and slow but now rejuvenated opponent.

In the crucial third round, Urvanov exploded in the center of the ring with some hard combos, finally wobbling Chuprakov with a vicious right hand. The elder fighter reeled to the ropes and started to take punches, getting almost nothing in return. Urvanov thrusted and landed several series, which landed mostly on the shoulders but also to the liver sectiong of his opponent. The referee saw enough and stopped it at 2:19 of the third. With the win, Urvanov captured a vacant WBO International 130lb title and is expected to crack up the ranks. Chuprakov's future looks foggy now.
Abkhazia-born Russia-based Igor Adleiba and lanky Venezuelan Eddy Colmenarez clashed against each other for a vacant WBO Youth welterweight title and lit up Ekaterinburg crowd in process. Adleiba looked to be a superior boxer and rightfully won, but Colmenarez had his moments too and also had one scorecard in his favour to make it not only close but a split.

The fight started slow, as both competitors were adjusting their styles. It was a tougher job for Adleiba, as Colmenarez at 6'1'' was quite tall for this weight class. Nevertheless, Adleiba took the first couple of rounds just narrowly by being a bit more active than the Venezuelan. The third was different, as it was nothing close about it. Adleiba, 21, rattled Colmenarez several times with hard, punishing blows, and had him reeling by the end of the stanza. The Venezuelan got back in the next couple of rounds, showing some solid skills in punishing Adleiba on his way in. In the sixth, he suffered a huge setback by losing a point for landing way too low several times. Both combatants engaged in close quarters in the seventh and brought up some fireworks in the eighth and final rounds. Adleiba rocked his foe several times early on but suffered a deep cut over his left eye. Colmenarez tried to but failed to capitalize.

Russian judge Yuri Koptsev had it surprisingly 76-75 - for Colmenarez, but he was overrode by Bence Kovacs (78-74) and Matteo Montella (76-75) - who had it just a notch for Igor Adleiba, who is now 9-0, 3 KOs. Eddy Colmenarez drops down to 6-1-1, 6 KOs, in the first loss of his career.
In an unusual fight, acting boxing referee and judge Andrey Fedortsov, competing simultaneously as a pro boxer, collided with former amateur standout Asror Vokhidov (6-0, 3 KOs) and lost a unanimous decision to him in a relatively close fight. Both boxers were consistent but Vokhidov's punch volume and finesse were just too much for previously undefeated Fedortsov (4-1, 1 KO) as he faded out dowln the line.
Vasiliy Voytsekhovskiy (2-0, 1 KO) looked good against previously once-defeated Denis Khamatov (5-2). The young Muscovite and devoted Torpedo Moscow FC fan almost dropped Khamatov in the first with a huge straight right, then continued punishment in the second round. After several huge shots, eaten flush by Khamatov, his corner halted the action at 1:19 of the round.
Evgueny "The Eagle" Nikitin (5-4, 2 KOs) produced one of his best efforts against Vazir Tamoyan (12-2-1, 3 KOs) but was denied a win by the judges, who had it unanimously for his foe, to some mild dismay not only of Nikitin and the crowd but also of Tamoyan himself. The bout was scheduled for six.
Last-year debutant Ivan Chirkov got his second career win with an easy and dominant unanimous decision over Kyrgyz native Dastanbek Imankaziev (2-1, 1 KO). Chirkov was light on his feet, yet dangerous with his hard, punishing attacks. He rocked Imankaziev several times but the latter managed to get through. Chirkov is 2-0.
Uzbek super featherweight Javokhirbek Karimov (4-0-1, 2 KOs) suffered a knockdown in round four but it was not enough for Stanislav Predybailo to capitalize on. Karimov thus won a four-round unanimous decision. Predybailo is now 2-3, 1 KO.
Super middleweight Khaibula Musalov (2-0, 1 KO) struggled at the begining of his fight against shopworn but still standing local veteran Karen Avetisyan but then rallied and dominated the rest of the rounds. Avetisyan did well in terms of survival - mostly because Musalov was showboating a bit too much - and lost a unanimous decision over six. The Russian Armenian is now an unflattering 9-30-4 (4 KOs), and hasn't won a fight since 2014. He is best known for going distance versus reigning WBO light heavyweight champion Sergey Kovalev, when the latter was a rising prospect.
Tags:
Evgeny Tishchenko