Kovalev: Yarde Says That He's A Lion, But For Me, He's A Kitten!

Sergey Kovalev eventually laughed and turned away as Anthony Yarde stared into his eyes Friday afternoon.

Kovalev figures Yarde was trying to intimidate him after they weighed in for their light heavyweight title fight Saturday night in Chelyabinsk, Russia, Kovalev’s hometown. It won’t work, according to Kovalev, because the defending WBO 175-pound champion has much more experience against championship-caliber opposition than Yarde, who’s undefeated, yet untested.

“He’s sure of himself because he never lost any fights,” Kovalev said following the weigh-in. “He says that he’s a lion, but for me, he’s a kitten.” 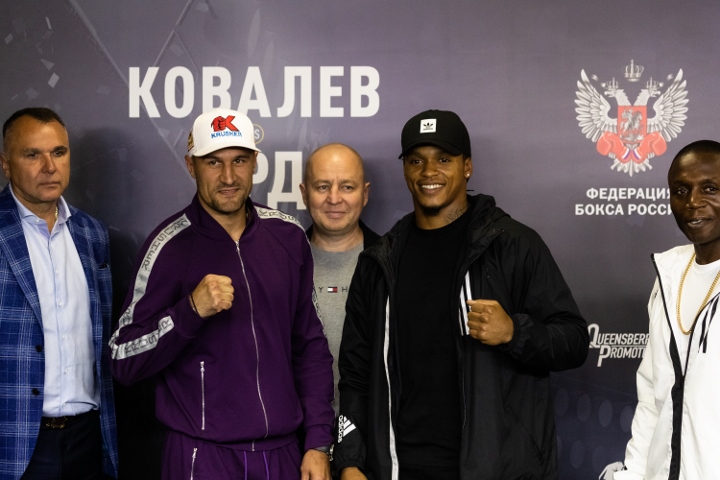 Kovalev, 36, laughed after making that statement, but the three-time light heavyweight champion is unsure what to make of the hard-hitting Yarde because his 28-year-old opponent hasn’t beaten even a ranked contender on his way to becoming the WBO’s No. 1 light heavyweight contender. Yarde has had just 30 fights combined as a professional (18-0, 17 KOs) and as an amateur (12-0, 11 KOs).

The battle-tested Kovalev is 33-3-1, including 28 knockouts. He has fought Andre Ward, Jean Pascal and Eleider Alvarez twice apiece and Bernard Hopkins during his lengthy run at the elite level.

“I don’t know,” Kovalev said of Yarde. “He says he’s ready, but we’ll see on Saturday, tomorrow. He’s young, he’s very strong, he has a hard punch. But tomorrow will be a big test for me because I’m already not 27 years old. When I was 32, 33, I was in my best shape. And then something changed in my body, but right now I found how to be better with my ages.”

Kovalev hasn’t paid much mind to Yarde repeatedly predicting that he’ll knock him out, either.

“He wants [to win by knockout], but I won’t let him do it,” Kovalev said. “Saying and doing are two different things.”

Most of the Kovalev-Yarde card will be broadcast by BT Sport in the United Kingdom (5 p.m. BST).

[QUOTE=VislorTurlough;20008914]Says a lot that Kovalev never had the courage to move up to cruiser. Nearly every great tried to move up and win. Enough of this guy.[/QUOTE] Most cruisers nowadays are 2-3 inches taller than kov and walk around at…

[QUOTE=VislorTurlough;20008914]Says a lot that Kovalev never had the courage to move up to cruiser. Nearly every great tried to move up and win. Enough of this guy.[/QUOTE] Not all...Hagler never did. Its a big jump to cruiser, MOST light heavys…

Kov’s a OG he knows if he stands and trades he will get unstuck That’s yarde’s best chance of winning .... kov comes to slug with a guy like yardie it’s curtains He’s a top boxer / ex top boxer…

[QUOTE=VislorTurlough;20008914]Says a lot that Kovalev never had the courage to move up to cruiser. Nearly every great tried to move up and win. Enough of this guy.[/QUOTE] I think boxers usually move up for 2 reasons. Either they have a…

[QUOTE=VislorTurlough;20008914]Says a lot that Kovalev never had the courage to move up to cruiser. Nearly every great tried to move up and win. Enough of this guy.[/QUOTE] 175 is the bigger division, there were good fights there and still are,…