Two weeks ago at the Mandalay Bay in Las Vegas, Ward stopped Kovalev in the eight round to retain his three world titles. After the contest, Kovalev complained that the contest was stopped early by referee Tony Weeks, and also blasted the official for failing to warn Ward for landing low blows to end the fight.

The fight was a rematch of their contest from last November, when Ward won a close twelve round unanimous decision to defeat Kovalev for the titles at the T-Mobile Arena. All three judges scored it 114-113, but Kovalev was very unhappy with those cards - feeling that he won at least eight rounds of the fight. 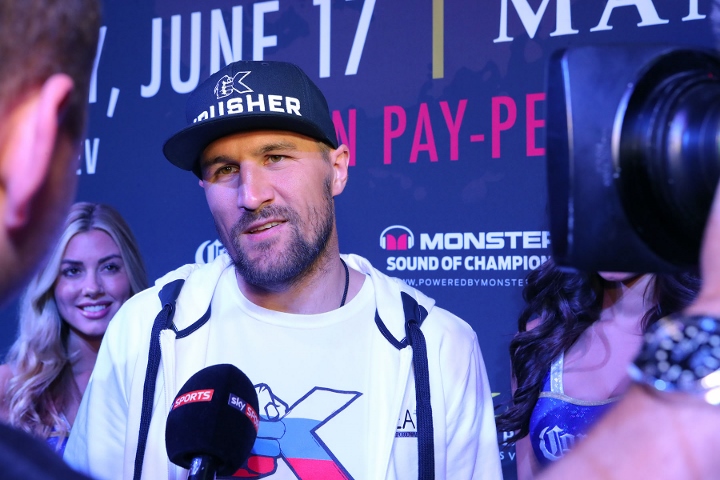 There are some fans who would like to see them fight each other for a third time, but Kovalev is not very interested because he believes Ward is too hard to beat with his backing.

"No, [the third fight] is not in my sights. Immediately, I want to note that it's not because I'm afraid of him. It's just because I need to let go of this situation, and it's just difficult to box against the system, against the local fighter. He is unbeaten, he has a very big support base and money too.... he has a promoter like Jay-Z and Beyoncé and between them they have a fortune of $3.5 billion, so it's difficult to box against that kind of machine. It is obvious that in the first fight, and the second fight - the officials were not on my side," Kovalev said.

In a recent interview that appeared on BoxingScene.com, Kovalev discussed the possibility of moving up to the cruiserweight limit of 200-pounds - which is a 25-pound jump from his current weight, and he also noted the high probability of working with a new trainer.

[QUOTE=vaynardevil;17819019]ye, but tbh none of kovalev attacks was effective only jab and 1-2 straight punch u can see ward gained confidence more as fight went on, while kovalev diminished maybe beterbiev has better chance to beat ward coz [B]he's good…

Kovalev said he would break Ward's hands. Said he would end his career and KO him. Now he's saying Ward's too difficult to beat

[QUOTE=vaynardevil;17819019]ye, but tbh none of kovalev attacks was effective only jab and 1-2 straight punch u can see ward gained confidence more as fight went on, while kovalev diminished maybe beterbiev has better chance to beat ward coz he's good…

[QUOTE=Mukuro;17815887]Maybe he got his number. He WAS having a big round and maybe Kovalev was on his way out cleanly. Maybe. He didn't go out cleanly, though. I like Ward and he's a great fighter without question, but I will…