There is still no movement on the stalled discussions to negotiate a rematch between Andre Ward (31-0, 15 KOs) and Sergey Kovalev (30-1, 26 KOs).

Last November 18th at the T-Mobile Arena in Las Vegas, Ward won a close and controversial twelve round unanimous decision over Kovalev to capture the IBF, WBA and WBO light heavyweight titles.

There was an immediate rematch clause in the contract. Kovalev, almost immediately after the fight, exercised his contractual option for a second fight - which both sides were hoping would take place in the first half of 2017. 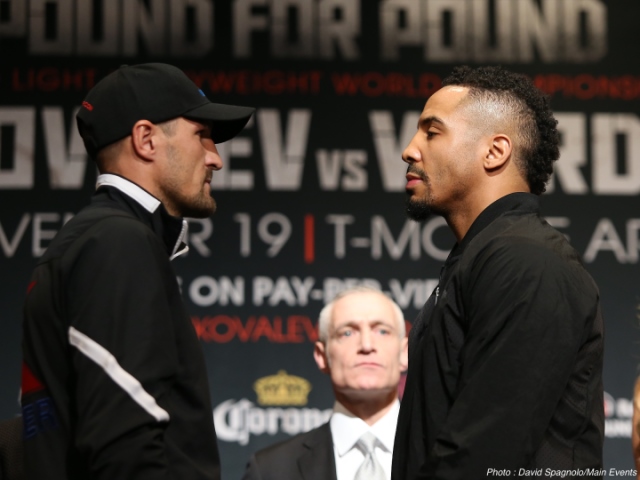 A few weeks ago, Main Events CEO Kathy Duva - who promotes Kovalev - told BoxingScene.com's Steve Kim that HBO was looking to stage the rematch on June 17th. It's not clear if the second fight will also get carried on pay-per-view.

But Duva also explained that there was a big problem, she was failing in her attempts to begin the rematch negotiations with Roc Nation Sports, who promote Ward.

According to Duva, Roc Nation had failed to respond to numerous letters pertaining to the rematch.

Fast forward to the present, nothing has changed. Duva has continued to pursue the rematch discussions - and she's failed to make any progress with Ward's promoter.

According to their first contract, Ward is unable to take any interim fights. He must face Kovalev in his next fight.

In several post-fight interviews, Ward actually threatened the possibility of retirement - unless the rematch terms and the entire scenario was satisfactory. Ward explained that he felt disrespected and wasn't happy with some of the post-fight statements that were made by Kovalev and his team.

"Ward's promoters continue to ignore our requests and letters. Ward is obligated to hold his next fight with Kovalev. Of course, if Ward refuses to fulfill his obligations, Sergey's career will still move forward and we will continue to pursue fights for him," Duva told Vasily Konov.

But I thought ward was ducking

[QUOTE=StudentOfDaGame;17450220]LOL :bottle: When 5 time World Champion and Gold medalist Ward clicks his fingers, the fight happens. If it's next month, two months or three months down the line then so be it. This undeserving woman leaves her own Boxers…

[QUOTE=champion4ever;17450937]It's a sad day when one cannot accept the reality that a hero of theirs has fallen. This is simply a case of too many unforced errors and missed opportunities. Had Duva or Kovalev done their homework by taking care…