by Tamas Pradarics, at ringside

Kovacs had a fast start and hurt Cipolletta to the body in the first round. The Hungarian champion took the center of the ring and controlled the action with good jabs and straight rights alongside with effective hooks to the body. An unintentional clash of heads left both fighters bleeding in round seven. Kovacs was cut on his forehead and Cipolletta on his left eyebrow.

The stream of blood bothered the Hungarian titleholder who turned to be more careful after the incident. That gave some room for Nicola to be more aggressive and he threw hooks and straight rights at Kovacs. 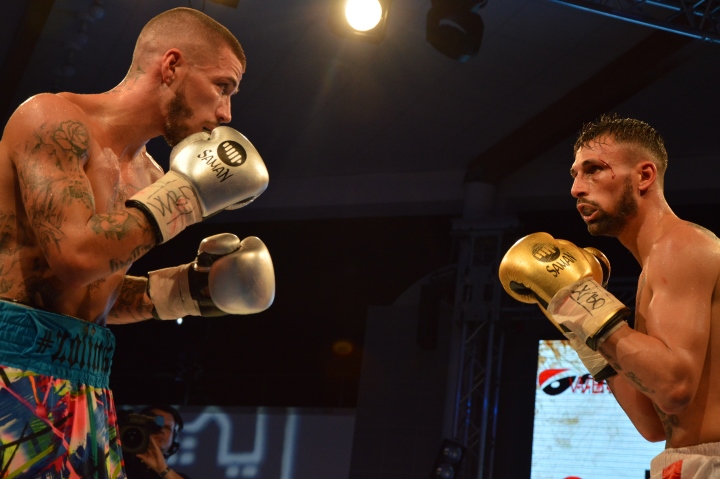 The champ was hurt from a clean left hook in round ten and they traded bombs in the final seconds of the bout.

All three judges scored the fast-paced encounter 97-93 for the defending beltholder who is expected to get one step closer to his ultimate goal of becoming a challenger to the WBO world title at 130-pounds.

Fellow world ranked Imre Szello (16-0, 9 KO) faced his toughest test to date in experienced American Garrett Wilson (17-12-1, 9 KO). The undefeated Hungarian cruiserweight threw quick one-twos and moved in and out to frustrate the cagey veteran. In round six Wilson landed a huge left hook to the body that hurt Szello. Garrett gave his all to trouble his more mobile opponent in the last two rounds but it was too little too late.

Szello won by well earned decision after eight frame. The WBO Inter-Continental beltholder is currently ranked #11 by the World Boxing Organization at 200-pounds.

Unbeaten and highly touted middleweight Norbert Harcsa (8-0, 1 KO) had a soft touch against Akos Kovacs (2-2, 1 KO) in an 8-round co-feature bout. Harcsa controlled the fight and produced three knockdowns but was unable to close the show.

Reigning Hungarian champion Balazs Torteli (11-1, 4 KO) made quick work of Serbian journeyman Mladen Zivkov (7-22, 2 KO) in a non-title welterweight matchup. Torteli floored his opponent twice in the first with well placed body shots and ended matters in the second after another pair of knockdowns.

Former two-time European Championship Bronze medalist and eight times National champ amateur Jozsef Darmos (4-1-1, 4 KO) won over previously unbeaten Gabor Detre (2-1) in the fourth. Referee Bela Florian has stopped it after Detre was battered heavily by his hard hitting foe. Darmos is on his way to jump out to international waters at cruiserweight.

Zoltan Kispal mauled Krisztian Duka with a brutal left hook in round four, Mate Kis dispatched Bojan Zarkov in the third heat, while the card opener four-round bout between Balazs Marton and Kristof Kovacs ended in a draw.