Their 12-round fight unfolded in quite different fashion than what Korobov expected to happen February 23 at O2 Arena in London. Eubank dropped DeGale twice, once apiece in the second and 10th rounds, and defeated DeGale on all three scorecards (117-108, 115-111, 114-111).

London’s DeGale (25-3-1, 15 KOs), a former IBF super middleweight champion, retired after suffering that decisive defeat to Eubank, who had been beaten soundly by another countryman, George Groves, a year earlier. In his first fight since defeating DeGale, England’s Eubank (28-2, 21 KOs) is nearly a 3-1 favorite to beat Russia’s Korobov (28-2-1, 14 KOs) in another 12-rounder on the Jermall Charlo-Dennis Hogan undercard Saturday night at Barclays Center in Brooklyn.

“Eubank is a really good fighter,” Korobov told BoxingScene.com prior to a press conference Thursday in Brooklyn. “But I was kind of surprised he beat DeGale. I don’t know what happened with DeGale. He was a favorite for the fight. But he beat him. That was his day, I guess. But he proved himself against DeGale. So, he’ll be there. He’s a pressure fighter. He likes action, so we’ll see [Saturday night].” 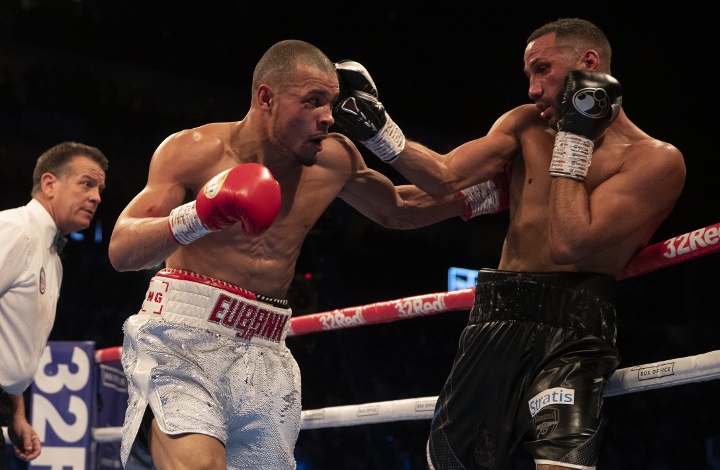 “I think DeGale wasn’t doing something [in training],” Korobov said. “I guess he wasn’t taking Eubank seriously. I think he thought it was gonna be an easy fight. That’s my thoughts about it. But that’s why it was hard for him to change during the fight. In his mind, he thought the fight would be easy. But Eubank proved himself really good. Now he can challenge any fighter. That’s why I’ll be ready.”

The 36-year-old Korobov, like DeGale, is a southpaw. One of Eubank’s two professional defeats came against a left-handed opponent, WBO super middleweight champ Billy Joe Saunders.

England’s Saunders (29-0, 14 KOs) beat Eubank by split decision in a 12-round middleweight match five years ago in London.