KID GALAHAD has taken to social media to taunt his rival Josh Warrington after Warrington's beloved Leeds United were defeated by Derby County last night in the Play-Off semi final.

Leeds were a goal to the good after the first leg of the Play-Off semi-final but succumbed to a devastating 4-2 home defeat and have now missed out on a place among English Football's elite in the Premier League.

Galahad, 26-0, posted a picture on his official twitter page of LUFC star Stuart Dallas laying on the ground in disappointment after losing the game and captioned it with a 'look' emoji, highlighting the heartbreaking loss for Leeds United and no doubt for Josh Warrington. 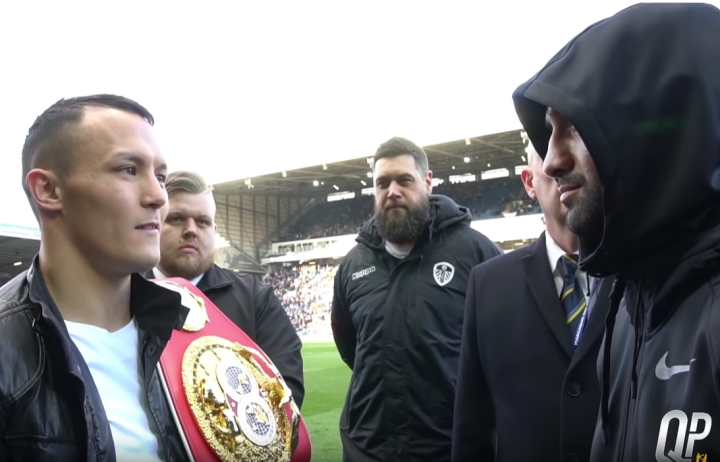 Sheffield's Galahad will be looking to inflict another upset defeat for Leeds fans on June 15 at the First Direct Arena when he attempts to dethrone local hero Josh Warrington and become the IBF World Featherweight Champion.

Warrington had earlier predicted a Leeds United win and will not have taken kindly to Galahad's online taunts.

It's been a spicy build up to one of the most anticipated fights of 2019 and this latest development will only add more fuel to the fire.

Josh Warrington tops the bill at First Direct Arena, Leeds when he defends his IBF featherweight championship against Kid Galahad on Saturday June 15.

[QUOTE=super-x;19747403]Should be entertaining fight... warrington only fights one way... very high work rate and comes forward all night... can Barry pick him off and keep him off for 12 rounds is what we all want to see.[/QUOTE] Yeah, he only…

Should be entertaining fight... warrington only fights one way... very high work rate and comes forward all night... can Barry pick him off and keep him off for 12 rounds is what we all want to see.

[QUOTE=W1LL;19747014]Kid Galahad acts like a scared little biatch in any kinda face-to-face confrontations with Josh Warrington. He can only talk big on social media or when he's being interviewed by Michelle Joy Phelps. Warrington likely going to work him over…

I reckon Warrington finally get's found out here. His best 2 wins were against; Selby who had to be take up Bulimia to make weight since the Gradovic win, and Frampton who has been physically and mentally done since the…