Khan on Crawford: This is My Chance To Show I Can Be Great!

AMIR KHAN has been craving the chance to become one of the top fighters on the planet for years - and believes every fighter should chase the best in the sport.

That is why he does not fear taking on what many believe is an impossible task of beating WBO welterweight king Terence Crawford this week in New York.

Khan, 32, has looked for super fights with Floyd Mayweather Jnr and Manny Pacquiao in a bid to prove himself as one of the best in the world. 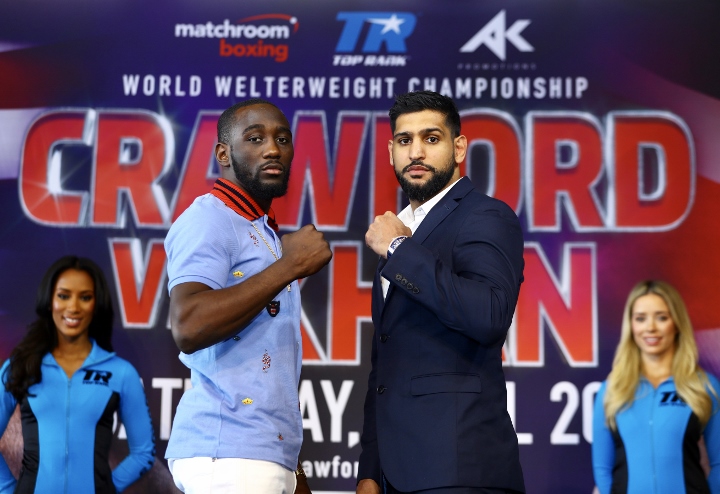 But he failed to nail either down and in desperation moved up to close to middleweight to take on Saul ‘Canelo’ Alvarez in 2016 which ended in a sixth-round knockout defeat.

Now back at welterweight, he has finally got his chance to take on one of the best fighters at his weight in Omaha puncher Crawford on the grand stage at Madison Square Garden.

“This is my chance to show that I can be a great,” Khan told Starsport from his San Francisco training base.

“I never shy away from any big challenge. I feel you have to be in the big fights. That is what drives me, gives me a push and gets the best out of me. If you are in sport, you want to play against the best, in boxing you want to fight against the best.

“Every fighter’s dream should be fighting the best.”

That is why Khan believes young fighters should look up to him despite a career record that includes four defeats.

He has already beaten world class operators such as Paulie Malignaggi, Zab Judah, Marcos Maidana, Devon Alexander and Marco Antonio Barrera, even if the latter was well past his best.

“It’s good to be in the mix with all these big fighters,” said the Bolton man.

“It is something young fighters should take out of my book.

“Sometimes you shouldn’t take the easy route, take those big fights, you’ll get respect for it but people will love you for it.”

Despite being an Olympic silver-medallist and world champion for his country, Khan has never really won over the nation.

But there would no doubt he would go down as one of Britain’s best if he pulls off a shock win over the American this weekend.

Khan added: “It will make me one of the best British fighters which is something I’ve always wanted. This is a fight that I can pen that in.”

Ends up showing everyone he's a can.....

So Canelo fighting a 50/50 fight against Jacobs is free in a few weeks in the UK, Wilder in a couple of weeks ...free. Another guy who nearly killed Khan, Danny Garcia is fighting a worthy opponent on Saturday free…

your family will always think u are great amir, unless u fall out with them of course

Khan's been sniffing the cocaine again.