Promoter Kalle Sauerland, also the chief boxing officer of the newly founded Comosa AG that will organize the World Boxing Super Series tournament, was interviewed in Danish paper BT and says he is positive to a showdown between Sauerland stablemates Mikkel Kessler and Erik Skoglund.

Sauerland feels the matchup is a classic between an old champion and a young challenge with the ever present Swedish-Danish rivalry on top.

However, Sauerland doesn´t rule out that both could end up in the WBSS tournament - in fact, BT writes that it seems both are likely to be a part of this tournament. 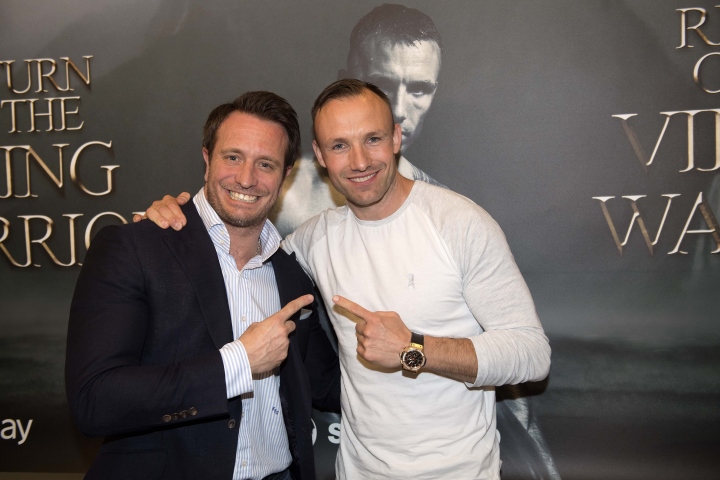 The never ending story of EBU bantamweight champion Kamel Guerfi´s defence against Stephane Jamoye that appeared to be on for July 1 in Manosque (France) is now off again and the EBU have set another date for purse bids and that is July 19. Guerfi-Jamoye has now been on and off since July of last year.
....

It will Sergio Blanco (23-3-1) that takes on Marc Vidal (9-1-4) for the vacant EBU featherweight title on July 22 in Barcelona in an all-Spanish matchup. Two days ago Dennis Ceylan left the title vacant and it was announced he would fight Kid Galahad July 15 in London for the vacant IBF I/C title instead.
....

German super middleweight Leon Bauer´s defence of the IBF Youth title will now go ahead on July 8 and not July 15 as previously announced but site remains the Friedrich Ebert Hall in Ludwigshafen. Bauer will take on Tanzanian Abdallah Paziwapazi on this Sauerland Event promotion.

Kessler was a beast, only lost to the ELITE elite, but he wasn't the same after the eye injury. 4 time world champion the only guys better than him were Calzaghe and Ward. But he fought them all, at 38…

[QUOTE=BattlingNelson;17761684]Yes. He will have to come Down in weight though.[/QUOTE] Ah interesting, Thanks mate :ANYWORD:

[QUOTE=Chrismart;17761523]Is Skoglund any good?[/QUOTE] Yes. He will have to come Down in weight though.

Is Skoglund any good?