Kerman Lejarraga: Losing Has Made Me a Better Fighter

Welterweight contender Kerman Lejarraga overcame a slow start to knock out Mexico’s Luis Solis in the fourth round late Saturday night at the Bilbao Arena in Lejarraga’s hometown of Bilbao, Spain.

With the victory, Lejarraga improved to 28-1, 23 knockouts.

The fight was Lejarraga’s first since losing by knockout to former contender and title challenger David Avanesyan on Mar. 30, which also took place at the Bilbao Arena. Lejarraga was up on the judges’ scorecards when the fight was stopped in round nine. 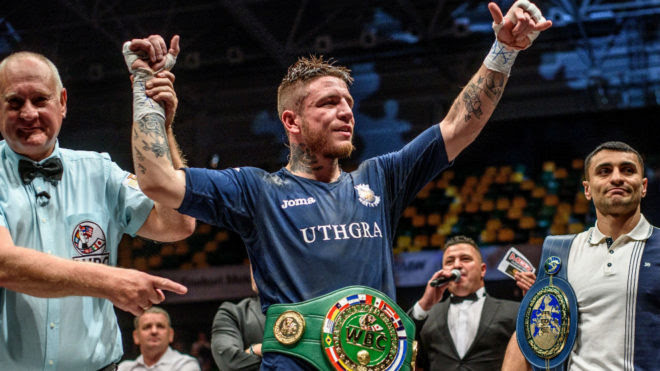 Solis entered the fight having won five of his previous six bouts, with the only defeat at the hands of junior welterweight contender Arnold Barboza, Jr. on Aug. 25.

The 27-year-old Solis was the more-effective fighter in the opening round, jabbing than landing a left hook to the body or an overhand right to the head.

By the second round, Lejarraga began letting his hands go, connecting with overhand and straight right hands to the head of Solis. Lejarraga scored often as he began walking Solis down, forcing Solis to fight off his back foot.

The 27-year-old Lejarraga is co-promoted by Lou DiBella and Mgz Promotions, which is based in Spain.

"This preparation served to polish any mistakes, because when you get used to winning you leave things like that to the side. Losing has made me a better fighter," Lejarraga said.

"The titles are always beautiful, but I just want to go back in the ring and win. Fighting is how dreams are fulfilled. We do not know what can happen, but since I lost against David Avanesyan I am clear in my objective that I will do whatever it takes to win that title again. I trust MGZ's work to make it real."

Featherweight contender Oleg Maynovskiy (24-0, 7 KOs) defeated Alex Mora by unanimous decision. All three judges scored the bout 79-71 in favor of Maynovskiy, who is ranked No. 3 by the WBO.