Keith Thurman In 'Far Better' Shape For Pacquiao Than Lopez

Keith Thurman didn’t train the same way for his comeback bout against Josesito Lopez as he did for higher-profile fights with Shawn Porter and Danny Garcia.

Thurman’s imperfect preparation for the Lopez bout nearly cost him his unblemished record and WBA welterweight championship January 26 at Barclays Center in Brooklyn. Getting through that troublesome seventh round with Lopez made Thurman realize that his conditioning had to be better for his following fight.

Thurman admitted that he is in “far better” shape for his showdown with Manny Pacquiao on Saturday night, and he expects that to make a significant difference in the way he fights.

“To be great, it takes great effort,” Thurman said during a recent conference call. “I’m applying myself in a better fashion, and I believe that it should show in the fight. I should have a better performance.” 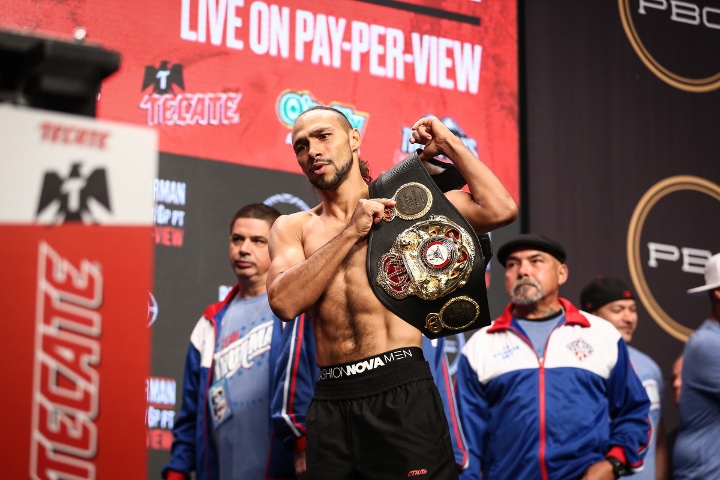 A resilient Thurman withstood Lopez’s seventh-round onslaught to win their 12-round bout by majority decision. Before he opposed Lopez, Thurman hadn’t fought in 22 months due to elbow surgery and a subsequent hand injury.

Thurman has worked with two strength and conditioning coaches for the Pacquiao fight, including rigorous workouts on the beach with former NFL wide receiver Yo Murphy. The 30-year-old Thurman insisted that he’s not joking when he says that his conditioning regimen for the Lopez bout was confined to a fitness center near his native Clearwater, Florida.

“People think I’m playing – I really trained myself at night at LA Fitness, on the spin bike,” Thurman said. “That was my conditioning for the Josesito Lopez fight. No disrespect to Josesito Lopez. I just knew that I can’t recall the last time a flat-footed fighter, Spanish fighter beat Keith Thurman. I can’t recall it in my amateur days. The last two amateurs that beat me was Charles Hatley and Demetrius Andrade. They were not flat-footed, Latino fighters. Styles make fights and I knew I could rely on my boxing IQ to be victorious in the fight. The seventh round proved to me that it was a little bit of a gamble. We got out of it. And if I wanna look better than that, I should train harder. And that’s what we’re doing.”