Katie Taylor finally has an opponent secured for her next title defense—and one where she can settle up on unfinished business.

The unbeaten lineal lightweight champion from Bray, Ireland has agreed to terms for a long-awaited rematch with Belgium’sDelfinePersoon (44-2, 18KOs). The two will collide on August 22, with the bout to take place on the property ofMatchroom Boxing headquarters inBrentwood, Essex, England.

The championship clash will serve in supporting capacity to a heavyweight clash between WBC interim titlist Dillian Whyte and veteran contender Alexander Povetkin, with both fights anchoring a Sky Sports Box Office event.

“Wow! What a fight - what a night! To be honest I can’t quite believe this fight has been made, I can’t give enough credit to Katie and Delfine for agreeing to do it again,” Eddie Hearn, Taylor's career-long promoter exclaimed after finalizing all terms for the rematch. “Since their epic Fight of the Year contender at MSG last year, everyone has wanted to see this once again and now we have it.

“I’m very proud to stage this fight especially at such a critical time for our sport - along with Whyte vs. Povetkin August 22 will be one not to forget.”

Taylor (15-0, 6KOs) and Persoon will meet nearly 15 months after they squared off in their four-belt unification last June at Madison Square Garden in New York City. Taylor roared out to an early start before having to fend off a strong second half surge from Persoon to claim a 10-round majority decision. The verdict was met with mixed reaction, with several experts believing Persoon deserved the nod. 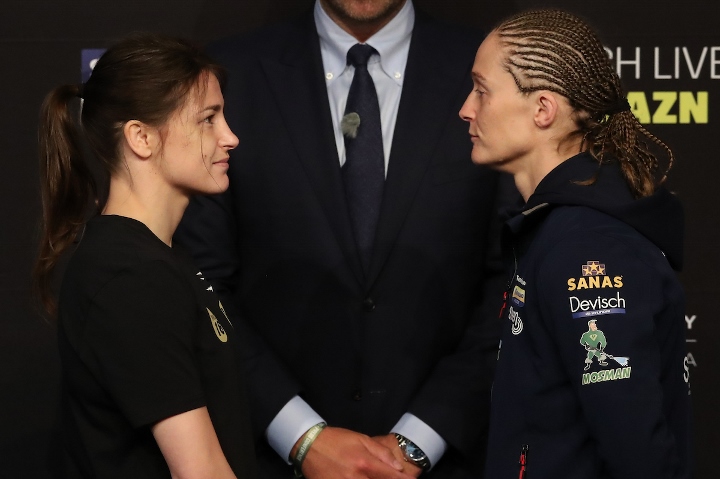 All told, it resulted in Taylor making the seventh defense of at least one lightweight title (WBA) which she’s held since 2017. For Persoon, it was the end of a lengthy WBC title reign spanning nine successful defenses in more than five years—and with both participants eager to run it back.

Even with Taylor-Persoon serving as the evening's chief support, it's fair to say there is more intrigue than was the case when they first met last June.

“It’s a much bigger fight because of the controversy from the first fight,” Eddie Hearn, Taylor's career-long promoter told IFL TV in a previous interview when the fight was still being negotiated. “Katie wants to take that fight because there is doubt in some people’s mind that she won that fight. So now, it’s a fight like all these fights in the world that deserves sold-out crowds in an arena. But we don’t live in that world anymore. If you’re a fighter, if you care about legacy and achievement, you have to adapt to this environment. You have to go for it.”

Taylor proved as much in her next—and most recent—fight, moving up in weight to outpoint Christina Linardatour last November in Manchester, England. The win netted Taylor—a two-time Olympian and 2012 Olympic Gold medalist—her second divisional crown, winning the WBO 140-pound strap before vacating shortly thereafter to drop back down in weight and compete at lightweight.

The victory over Linardatou was the third in as many fight in 2019 for Taylor, who also won the 2019 Christy Martin Award as the Female Fighter of the Year, as voted by the Boxing Writer's Association of America (BWAA).

The fight announcement ends several weeks of back and forth between Hearn and Persoon's manager, Filiep Tampere who went to the British media on Wednesday night in claiming the fight was in jeopardy.

Whether valid issues existed or claimed just to drum up interest, the matter took a turn for the better on Thursday with all terms agreed to—which BoxingScene.com has learned through sources will also include full random drug testing as contracted through Voluntary Anti-Doping Agency (VADA) which has already begun.

VADA official declined comment, nor would offer confirmation as this goes to publish.

The bout replaces previous plans for a targeted superfight between Taylor and Amanda Serrano, a record-setting seven division titlist from Brooklyn by way of Carolina, Puerto Rico. The Boricua southpaw previously agreed to a May 2 showdown with Taylor, to have taken place at Manchester Arena in Manchester, England. The date was scrapped due to the ongoing coronavirus pandemic, as was an announced rescheduled date of July 4. The decision to move the event from Manchester to Matchroom headquarters came due to the need to stage the card at a location without fans in attendance.

Serrano and her team balked at the idea of traveling overseas to literally fight in the backyard of her opponent's promoter. The matter remains a point of contention and potentially one for the courtroom.

"With Amanda Serrano not taking the fight I wanted the biggest fight possible in August and I think a second Persoon fight is one that everyone wants to see,” said Taylor. “I've been looking forward to a rematch ever since the first fight and I'm delighted it's been made. It was definitely very close first time around, but I felt I deserved the win and I intend to leave no doubts in the rematch."

Meanwhile, Persoon and her team had no such issues going that route.

"I am ready to get the victory following the injustice last June in New York," insists Persoon, whom outpointed Helen Joseph last November in her lone fight following her narrow loss to Taylor. "Not by words but in the ring. I am ready!"

[QUOTE=bigjavi973;20651272]ima look up the fight again[/QUOTE] [img]https://i.imgur.com/NEgm7Sj.gif[/img] Katie Taylor ran like chicken! I'm shocked that Taylor is going through with the rematch. I struggled to give that English-Bum Katie Taylor, more than two rounds.

[QUOTE=1hourRun;20649215][img]https://i.imgur.com/p8dEQTf.gif[/img] Katie Taylor, the world knows you are no undisputed women's lightweight champion. Delfine Persoon is going to mob the floor with you! UP BELGIUM![/QUOTE] ima look up the fight again

[QUOTE=sayf;20651161]I genuinely still don't understand why it matters to anyone which promoter a fighter has, unless they are actively stopping the big fights. Other than that why care? They're insignificant beyond the making of the fight, but I see people…

[QUOTE=Ray*;20650670]My post isn’t targeted at someone as yourself. The ones who the post is targeted at know who they are. They don’t express opinions with facts, they do it through hate, and the Taylor hate is only due to her…

Respect for taking the rematch; this is a harder fight than Serrano. Hope it isn't the blatant robbery the first fight was.