Katie Taylor considers her rematch with Delfine Persoon the best alternative to testing herself against Amanda Serrano on August 22.

The Taylor-Persoon rematch, which was officially announced by Matchroom Boxing on Thursday, was put together relatively quickly once it became clear that Serrano would not agree to fight Taylor next month in England. Taylor’s unconvincing victory over Persoon in their first fight 13 months ago gives her plenty of motivation now that the Serrano showdown has fallen apart.

Taylor-Persoon II will be part of the Dillian Whyte-Alexander Povetkin pay-per-view undercard on the grounds of Matchroom’s headquarters in Brentwood, England.

“With Amanda Serrano not taking the fight,” Taylor said, “I wanted the biggest fight possible in August, and I think a second Persoon fight is one that everyone wants to see. I’ve been looking forward to a rematch ever since the first fight, and I’m delighted it’s been made. It was definitely very close first time around, but I felt I deserved the win and I intend to leave no doubts in the rematch.” 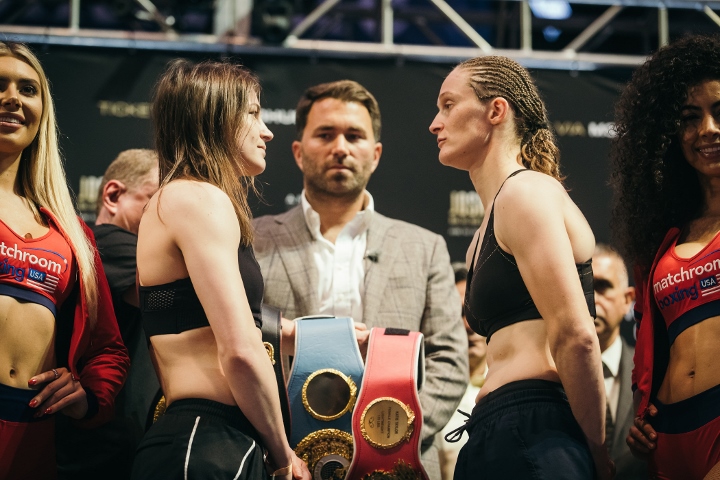 A relentless, rough Persoon pushed Taylor unlike any other opponent she has faced in their June 2019 battle at Madison Square Garden in New York. Judge Don Trella scored their back-and-forth, entertaining encounter even (95-95), but he was overruled by judges Allen Nace and John Poturaj, each of whom scored their lightweight title unification fight 96-94 for Taylor.

Belgium’s Persoon (44-2, 18 KOs) has wanted a rematch ever since losing that majority decision on the Anthony Joshua-Andy Ruiz Jr. undercard.

Promoter Eddie Hearn is thankful that Persoon was available once it became clear Taylor-Serrano wouldn’t happen as expected.

Persoon planned to fight in the 2020 Summer Olympics, which were supposed to take place next month in Tokyo. The postponement of that event until next summer due to the COVID-19 pandemic left the 35-year-old Persoon without a fight scheduled.

“To be honest, I can’t quite believe this fight has been made,” Hearn said. “I can’t give enough credit to Katie and Delfine for agreeing to do it again. Since their epic ‘Fight of the Year’ contender at MSG last year, everyone has wanted to see this once again, and now we have it.”

Katie lost the first fight bar none, but for some reason, the guy/girl who wins the fight under dubious terms usually wins again definitively in the rematch. Floyd/Castillo Chocolatito/SRR Ward/Kovalev I don't know why. Maybe getting robbed discourages or takes…

[QUOTE=1hourRun;20655313]Tyson Fury has a funny dorky accent but hes a Brit, dont tell me he is 'Irish'. Europeans are weird.[/QUOTE] ...and running boxing. Stay jealous, poppet ;)

[QUOTE=1hourRun;20655020]The swelling on Delfine Persoon was due to head-clashes and forearms from Katie Taylor, as Persoon kept walking that English-Bum down, eating her best shots and getting the better of the exchanges. Taylor could not stop the onslaught, Persoon is…

[QUOTE=Ray*;20655231]Not with her strong Irish accent which is pretty apparent that she isn't from the UK. Most Irish boxers fight in the UK or america.[/QUOTE] Tyson Fury has a funny dorky accent but hes a Brit, dont tell me he…

[QUOTE=1hourRun;20655215]What?! Why does Katie Taylor only fight in England?! I think she has not fought a single fight in 'Ireland' . Listen, thanks for trying to help but I think Katie Taylor is more English and Irish/Scottish.[/QUOTE] Not with her…