Katie Taylor: Amanda Serrano Doing Everything To Avoid Me

In the co-main event on Saturday night in Boston, 2012 Olympic gold medalist Katie Taylor, of Ireland, retained her International Boxing Federation and WBA female lightweight titles with a 10-round unanimous decision over Cindy Serrano, of New York. All three judges scored the bout 100-90 for Taylor.

''She was very defensive,'' said Taylor, who is now 11-0 with five knockouts. "She really wasn’t doing very much at all. I was very very surprised. I had a lot of respect for Cindy coming into this fight and I thought she was going to give everything she has.” 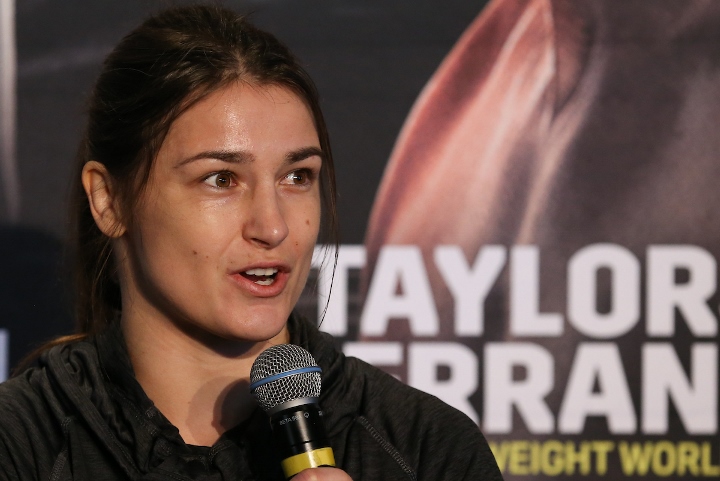 Former two-time UFC champion Conor McGregor was at ringside to cheer Taylor on.

''He came into my dressing room before my fight and wished me luck,'' Taylor said.

Now Taylor looking ahead and wants a showdown with Amanda Serrano.

“She has to come out of retirement for the fight that everyone wants to see. I think she’s pretty doing everything she can to avoid a fight with me,” Taylor said.

“I think I’m fighting December 15th? I just want to be involved in big fights again. It was great atmosphere tonight and it was great to fight one of the Serrano sisters.”

"Women’s boxing is at a real high at the moment. There’s a lot of talk around all these fights that are happening. It’s the first time in the history of the sport that women are on TV. It’s great for the sport and it’s great to be a part of it.”

Eddie Hearn, who promotes Taylor, is more than willing to match her against Serrano next.

“Amanda will do, if she wants to go next. I think Katie needs the tests otherwise she’ll get bored, and she needs to challenge herself. We expected a challenge tonight. I would still love to fight a champion because I know Katie is about legacy. The original aim is to be the undisputed champion of the world,” Hearn said.

If Amanda is real about boxing she would first beat her sister's ass for such a bs performance then go fight Katie. I don't think it will happen. But I've been wrong before!

Katie is a savage and puts a schooling on Serrano

Serrano has been fighting hand picked opponents for a few years now, they won't ever fight and Taylor beats her easily if they do.

Women's boxing should be consigned to the Beta Male section of NSB.