Karlos Balderas Takes Out Luis May in Four Rounds

Rolling with more than 100 family members and friends in attendance, Karlos Balderas provided his faithful following plenty of reason to cheer in what was nearly the deepest fight of his young career.

Balderas boxed patiently in the opening round before heating up even as temperatures began to dip below 60° in the outdoor venue. An overhand right late in round two put the fleshy May down for the first time in the bout, only for his night to get much worse. 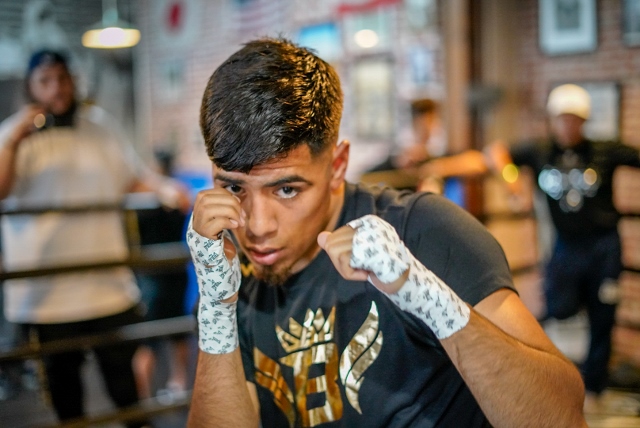 The early portion of round three saw May trapped along the ropes, with Balderas pounding away to the midsection. A pair of left hooks to the body caused May to double over in falling to the canvas, beating the count but also receiving stern warning from referee Ray Corona that the fight was on the verge of being stopped if he couldn’t turn things around.

Balderas remained poised, scoring a second knockdown in the round and third on the night later in the round. A counter left hook sent May stumbling across the ring, the shot quick enough to where he believed he was pushed.

May flirted with disqualification in round four, losing a point for low blows and then going right back downstairs mere seconds later. Balderas remained unfazed, fixated on ending the night and sending his adoring fans home satisfied. A final left hook provided that moment, sending May to the canvas once again and this time without a count being issued as his corner requested the referee stop the contest.

The official time was 1:07 of round four.

Balderas rolls to 8-0 (7KOs) with the win, matching the deepest he’s had to go in his young career. The 22-year old from Santa Monica, Calif.—who advanced to the quarterfinal round of the 2016 Rio Olympics for Team USA—went the distance in a four-round decision victory last February as well as scoring a 4th round knockout at Staples Center last July.

May suffers his first stoppage loss since moving up from bantamweight four years ago. The 35-year old from Cancun—who owns a seafood business in his hometown—falls to 21-14-1 (8KOs) having now lost five of his last six starts.