Things went much smoother for the Birmingham, England native in his latest adventure than was the case in his most recent title defense. Yafai was considered fortunate to have retained his title in a 12-round nod over unheralded Israel Gonzalez, at the very least with the final scores much wider than should have been the case in their title fight last November.

It was expected that Dominican Republic’s Jimenez would provide a similarly tough challenge, given his career resurgence. The 28-year old came in riding a 28-fight unbeaten streak after being thrown to the wolves amidst a 3-8-2 career start. His second career title fight was nowhere nearly as adventurous as his 12-round draw with Kohei Kono in their 2014 New Year’s Eve battle, as he spent most of the first rounds moving backwards and barely able to keep his legs steady despite not being hit with anything of note. 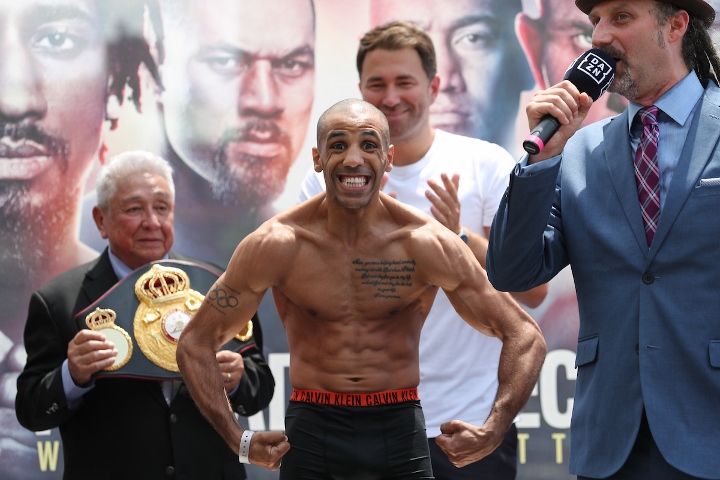 Yafai didn’t waste any punches, cleanly outboxing the resurgent challenger in building an early lead. It expanded even wider after Jimenez was docked a point by referee Danny Schiavone for excessive holding. It actually seemed to wake up the streaking contender, with two way action ensuing in the back half of round five.

The moment was short-lived as Yafai immediately resumed control in round six. A series of left hooks to the body caused Jimenez’s knees to buckle, barely avoiding a knockdown but unable to keep the defending titlist off of him. He was spared further punishment when Yafai had his mouthpiece dislodged, with momentum temporarily stalled.

Left hooks remained the weapon of choice for Yafai in round seven though a frame that was probably Jimenez’s best of the night to that point. Seemingly well behind on the cards, the second-time title challenger attempted to stand his ground more, managing to catch an incoming Yafai with right hands upstairs. Yafai attempted to pick up the pace late in the round, only for a swinging left hook by the unbeaten titlist causing him to lose his balance and slip to the canvas.

“I am struggling to hear right now. I perforated both of my eardrums,” Yafai told DAZN’s Chris Mannix after the contest.

Jimenez would find himself on the canvas one round later, this time from a vicious low blow from Yafai, who was fortunate to have only received one warning prior to that point. A left hook with good intentions instead caught the challenger square in the middle of his cup, causing to drop to his knees in withering pain. He wisely took as much time as possible to recover, ending the round with a parting shot as the two had to be separated by Schiavone, who had his hands full all night and struggled to maintain order.

Adding insult to injury was a questionable knockdown call in the 12th and final round. Yafai twice caught Jimenez behind the head with cupping left hooks, the second one literally throwing him to the canvas only for the referee to rule it an official knockdown. It mattered little, as Yafai was miles ahead on the scorecards by that point.

The loss is Jimenez’s first in more than eight years, as his U.S. debut results in his 28-fight unbeaten streak coming to a close.

Meanwhile, Yafai returns home to England as winner and still champ in improving to 26-0 (15KOs). His second career stateside fight didn’t draw any love from the pro-Jimenez crowd, however.

“It wasn’t easy, fighting in front of a very hostile crowd,” noted Yafai. “I have a bone to pick with Eddie Hearn, my promotor, he put my fight in the United States for the second time. I am fighting in Providence, but little did I know that it is full of Dominicans!”

With the win, he remains not only England’s longest-reigning titlist but also just behind Jerwin Ancajas among the veteran titleholders at super flyweight. Having held a strap for 30 months and counting, the Brit believes it’s time for a superfight.

“I won easily, now on to the big fight,” stated Yafai, although with a mandatory defense due versus Australia’s Andrew Moloney (20-0. 13KOs). “I want (current World champion Juan Francisco) Estrada, (former champ Srisaket Sor) Rungvisai, Chocolatito (former four-division champ Roman Gonzalez). “Those kinds of guys have to be next.”

The bout streamed live on DAZN, in supporting capacity to hometown hero Demetrius Andrade in a middleweight title defense versus Poland’s Maciej Sulecki.

[QUOTE=lagako10;19868654]this super flyweight chump outboxed the 3 year inactive boxer what a shameful![/QUOTE] Jimenez wasn't inactive for 3 years though. Check Boxrec and see that you're wrong. He's as active as any one else is.

this super flyweight chump outboxed the 3 year inactive boxer what a shameful!

what an awful fight.

That ref is a matchroom shill, he didn't even break them up properly, he wouldn't separate them fully so that they were split up, which obvs suited yafai.