Junior Fa Will Be Aiming To Stop Dominick Guinn at Pechanga

Heavyweight WBO # 7 Junior Fa is ready to put on a show on ESPN + against tough veteran Dominic Guinn at the Pechanga resort and casino in Temecula, California June 28.

Fa, who has a perfect record 17-0 (10 KO's) faces the experienced and never stopped Dominick Guinn 37-12 (26 KO's) says he wants to capitalise on the ESPN + exposure and be the first man to stop Guinn.

"I know Guinn has been training hard and is in great shape but I'm looking to stop this guy! I'm not here for a conservative points win. I'm coming here to stop him!" stated Fa. "I'm not going to say in the media I'm not looking for the stoppage, that would be a lie." 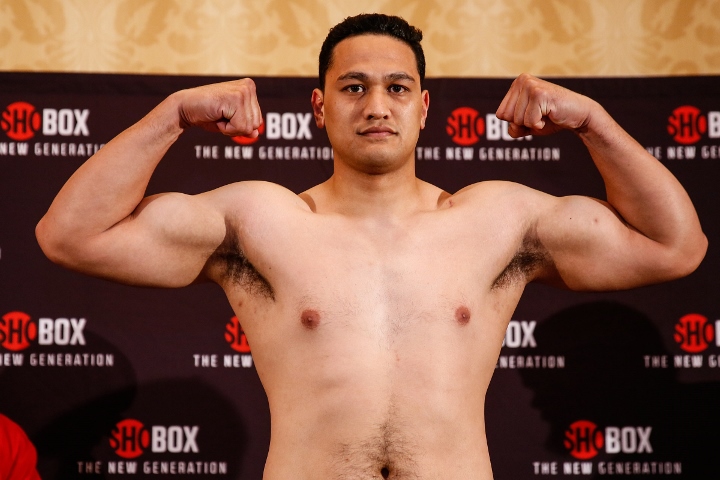 IN OTHER NEWS: Unbeaten super lightweight prospect, Omar "El Relampago" Juarez (3-0, 1 KO) of Brownsville, Texas, will fight for the first time in his home state as he faces Seifullah Jihad Wise (3-6-1 1KO), in a four-round bout from NRG Arena in Houston. This fight will be an off-television bout on the Jermall Charlo versus Brandon Adams card.

"I am excited to be making my Texas debut," said Omar Juarez about his homecoming bout, "I have a lot of fans who will be in attendance and I'm ready to show out. I am excited about being able to display my skills in front of my home state fans. All of the hard work and dedication I have put into the sport is paying off."

"My son has always been a hard worker since he started boxing," said Rudy Juarez, the father and trainer of Omar Juarez. "We always wanted to fight in Texas, so this is a dream come true for both of us. To be fighting on a such a big stage is tremendous and a great opportunity, one we are grateful for."

Juarez, who turned professional last September has wasted no-time as this will be his fourth fight in just nine months and in his last bout defeated Dwayne Bonds, who held a record of three wins, one loss and one draw at the time, Juarez' third fight.

"I plan on going in there on Saturday night and performing at my highest level possible," concluded Omar Juarez. "I want people to be excited to see me fight, and I am so excited with all the family and friends that will be there in attendance.

Dominick Guinn ....haven't heard that name since 2006 or so. He was passed his best even back then.

Guinn is still fighting? He must be 100 years old now.

Nobody can KO the Southern Disaster, it's not possible, I don't even think he's ever been down. His chin makes Kingpin Johnson's look like Khan's

Nice guy to KO if he can. Guinn ain't sh^t these days & hasn't been for a long ass time at this level, but stopping him would be a nice claim for Fa to have.