Burns is coming off a very tough mandatory unanimous decision over Kiryl Relikh. In his last fight in December, Indongo pulled off one of the biggest upsets of 2016 when he knocked out undefeated Eduard Troyanovsky in one round to win the IBF, IBO world titles in Russia.

Burns was mostly on the move in the first round, with Indongo following him around and letting his hands go. Indongo continued to come forward in the second round, using his long reach and coming forward. Burns was still on the move, starting low and trying to figure his opponent out. Indongo was using distance and speed to control the contest.

Burns was still having trouble in the third, with Indongo pressing with that reach and straight punches. Indongo started digging to the body, looking to slow down the movement of Burns. In the fourth, Burns was trying to solve the tricky southpaw style of the long Indongo but he was having trouble to find the target. Indongo's jab and fast punching was dictating the fight, and he was going to the body. Indongo was really unloading with a lot of shots in the final minute.

Indongo continued to press forward at the start of the fifth, letting his punches fly and Burns was being pushed back. Burns was rattled by a good hook and moved around to recover.  The sixth was closer as Burns was trying to get more aggressive, but he was rattled once again during an exchange and Indongo still had the edge in the action. 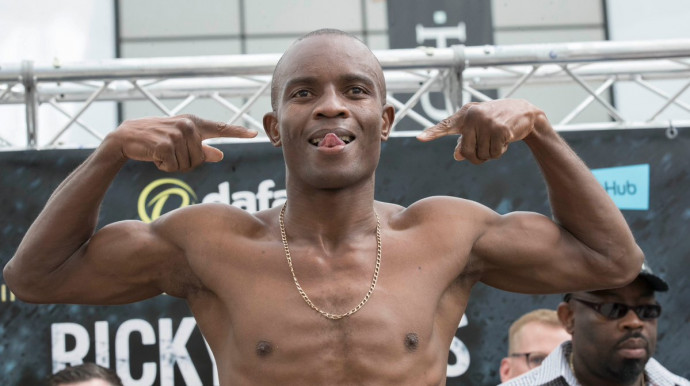 Burns was not moving as much at the start of the seventh. He was trying to stand his ground and make it a fight.  Burns was trying to get the jab going, but he was being countered by the longer Indongo. No end to the tricky style of Indongo in the eight. He had Burns back on the move and was back to targeting the Scot's body. His jab was still pushing Burns back with shots including a big shot that rocked his legs in the thirty seconds.

Indongo was dominating the action in the ninth as Burns appeared to have little left and wasn't throwing much back at all. Indongo was accurate with his counters, connecting well to the head and body of Burns. The jab of Indongo and his long arms were too much for Burns to deal with. In the tenth, Burns was trying to make it a rougher fight on the inside. The left hand of Indongo was still on point and pressing Burns back. Burns was making the rounder closer as Indongo was tiring a bit.

Indongo was back on the gas in the eleventh, throwing and landing a lot of hooks. He began to mix things up with straight shots to the body. Burns not able to do much and he was missing almost all of his counters. Burns was being worked over in the twelfth and final round. It appeared that Burns went down, but the referee waved it off as a slip. Indongo continued to outbox Burns until the final bell.