Julius Indongo Confident That He Will Shock Regis Prograis

Indongo replaces the previously announced Viktor Postol, who was forced to withdraw from the bout with a hand injury.

Born in Namibia and now fighting out of Omaha, NE, Indongo (22-1, 11 KOs) is a former unified champion who held the IBF and WBA 140-pound titles. 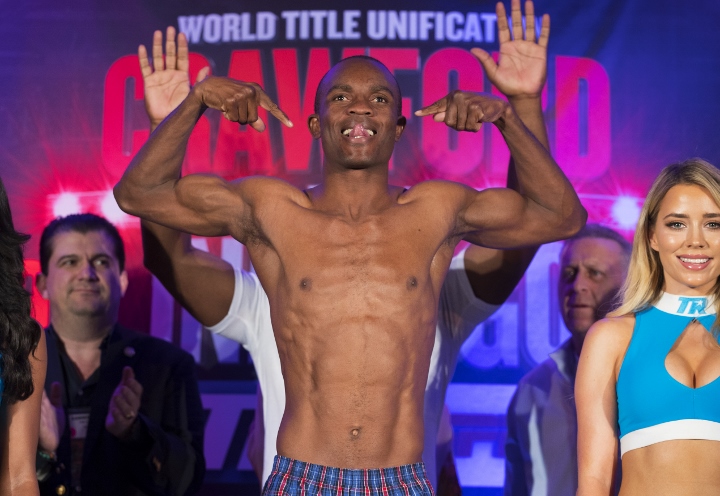 In 2016, Indongo traveled to Moscow, Russia, to dethrone IBF Junior Welterweight Champion Eduard Troyanovsky with a stunning first-round knockout.  In his first defense as champion, Indongo traveled to Glasgow, Scotland, for a unification bout with WBA Champion Ricky Burns.  The 35-year-old won a 12-round unanimous decision to become unified champion.

In his first bout as a unified titleholder, Indongo made his U.S. debut against fellow undefeated and unified champion Terence Crawford in a showdown to determine the undisputed champion of the 140-pound division.  It was the first championship bout with all four major world titles at stake since Jermain Taylor dethroned Bernard Hopkins in 2005.  Indongo lost to Crawford, suffering the only defeat of his professional career.

“I’m very excited to fight Regis Prograis on March 9,” said Indongo. “This is a great opportunity for me toward becoming a world champion again. I know how good Prograis is, but come March 9, I’ll be victorious.”

“While it’s unfortunate that Viktor Postol suffered this training injury, we’re thrilled that Julius Indongo jumped right at the opportunity to face Regis Prograis for the interim WBC title,” said Lou DiBella, President of DiBella Entertainment. “Regis wanted to prove himself against the best, and he will still be afforded that opportunity when he meets former champion Indongo in what promises to be a sensational clash of styles.”

Prograis (20-0, 17 KOs), of Houston by way of New Orleans, has scored knockouts in 13 of his last 14 fights and is a rising star in the wide-open 140-pound division. Indongo represents the toughest challenge of his career with his lone loss to one of the top fighters in boxing, Terence Crawford.

In the 12-round co-feature, undefeated 140-pound contenders Ivan Baranchyk (17-0, 10 KOs) and Anthony Yigit (21-0-1, 7 KOs) will square off in a Junior Welterweight World Title Eliminator to become the mandatory challenger for IBF champion Sergey Lipinets. Lipinets will defend his belt the following day, March 10, on SHOWTIME CHAMPIONSHIP BOXING® against undefeated three-division champion Mikey Garcia.

The event is presented by DiBella Entertainment, in association with Elite Boxing, Fight Promotions Inc., Holden Productions and Sauerland Promotions. Tickets, priced at $200, $80 and $60, are on sale now and can be purchased on Ticketmaster.com or by calling (877) 907-4726.

Former world champ or whatever,Indongo is straight up garbage and I said that after the burns fight. Was tripping over his own feet that night. Fortunstely burns was much smaller and shot to ****. If prograis is any good he'll…

[QUOTE=GreatErikk;18482428]Indongo by KO[/QUOTE] Put your money up then...I got whatever you can afford on Regis Prograis

[QUOTE=Dr.Cool;18482456]I don't mean to imply Bud isn't special, just that his resume does not show it. The best win for Postol was a shot Matthysse and the best win for Indongo was either Troyvanski or whatever or Ricky Burns. Yes…

[QUOTE=Dr.Cool;18482158]So, if Prograis beats Indongo and then Postol, where is he p4p? This kid has never fought any champion and now he is fighting what is probably the best W on Crawford's entire resume. Which proves two things: Prograis is…