Julio Cesar Martinez is ready for his place on one of the biggest cards of the year.

The squat knockout artist from Mexico City is set to make the third defense of his flyweight title, which will take place December 19 with fans in attendance at The Alamodome in San Antonio, Texas. Martinez is set to face countryman Francisco ‘Chihuas’ Rodriguez, with the bout considered a done deal pending official announcement. 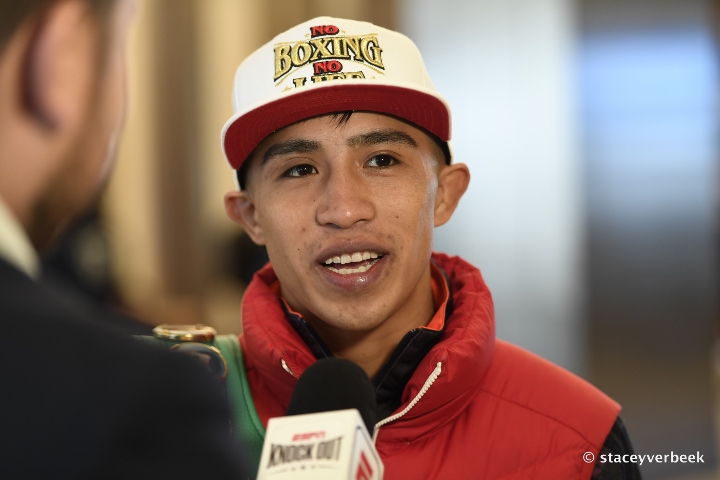 Alvarez and Martinez are both trained by Eddy Reynoso.

Martinez has managed to maintain an active pace even in spite of the ongoing coronavirus pandemic. The 25-year old from Mexico City claimed a flyweight belt in a 9th round knockout of former champ Cristofer Rosales last December in Phoenix, Arizona. The upcoming clash versus Rodriguez (33-4-1. 24KOs) will mark his fourth fight in a span of 52 weeks dating back to that title winning effort.

Wedged in between are a pair of title defenses which didn’t disappoint in action. Martinez turned away a determined challenge from unbeaten Jay Harris to outpoint the Welshman this past February in Frisco, Texas, in one of the final cards before the pandemic.

Most recently, Martinez pummeled countryman and late replacement Moises Calleros en route to a 2nd round knockout this past October in his Mexico City hometown.

Rodriguez enters riding a 14-fight win streak, most of which has been a level below his strawweight title run. The 27-year old from Monterrey reigned in boxing’s smallest weight division in 2014, a title reign which was preceded by a knockout loss to Roman ‘Chocolatito’ Gonzalez, then an unbeaten two-division titlist whom was testing the flyweight waters.

Rodriguez eventually outgrew the strawweight division, though not before his August 2014 war with Japan’s Katsunari Takayama. Their 12-round slugfest was hailed by BoxingScene.com as the 2014 Fight of the Year.

A move up in weight initially provided disastrous result, having been held to a draw versus journeyman Jomar Fajardo (before beating him in a rematch) and dropping back decisions to then-junior flyweight titlist Donnie Nietes and countryman Moises Fuentes in 2015.

Rodriguez has since settled in at flyweight, having not lost in five years entering his bid to become a two-division titlist.

Glad to see him land on a card this big. If he’s co-main event, then that means he’ll be getting a lot of exposure. Martinez will bring attention to the flyweight division with his exciting style.