A wild hook to the liver at 57 seconds of the fifth round was enough for Julio Cesar ¨Rey¨ Martínez, who stopped British fighter Andrew Selby to become the official challenger to the world flyweight title of the WBC, before a jubilant crowd at the Metepec Fairground in a co-promotion of Zanfer and Class & Talent. Azteca TV televised.

In the first round, the Briton used his jab to take care of his distance before the Mexican unleashed a good combination of punches that created cries from the fans, who did not stop supporting the local man all night.

In the third round an accidental head-butt from "Rey" Martínez caused the ring doctor to supervise the Briton, who bled from the left eyebrow and was allowed to continue; and Martinez was penalized a point. 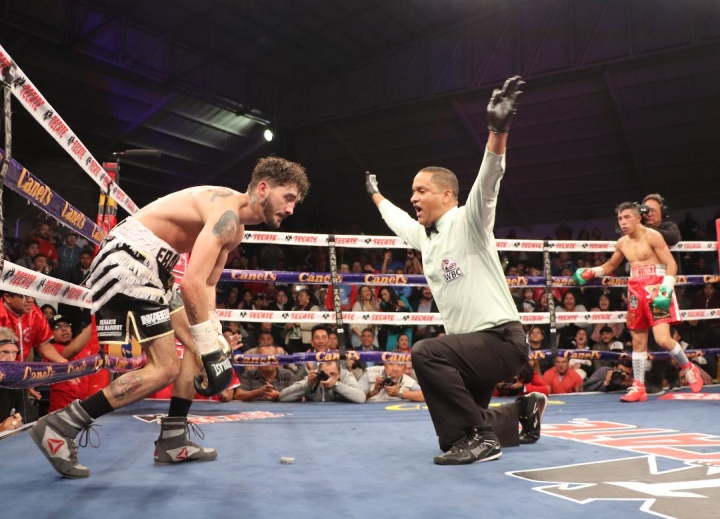 Martinez was the one who was pressuring a moving Selby around the ring, looking to corner him and fight at short range, and a couple of times he managed to connect on him, and at the end of the fourth round he dug to the body, and there was good body blow that caused pain for Selby.

But it was in the fifth roll when Julio Cesar landed with a lethal hook to the liver that sent Selby to the canvas. Selby listened to the entire count of ten of the referee Hector Afu, as Martinez was declared the winner.

With this victory, the Mexican improved his record to 14-1, 10 by way of knockout, while Selby suffered the first defeat of his career (11-1, 6 KOs) and will have to wait for another chance to secure a world title shot.

"Rey" Martinez will fight for the world title with Charlie Edwards, who on Saturday retained his green and gold belt with a lopsided decision over Angel Moreno of Spain.

Looks like Martínez has been dining on a juicy bbq prime Mexican beef steak at chez Clenelo the cheating b...and he gets away with it lol good ol WBC! Andrew Selby was robbed and we all know it!

[QUOTE=Mexican_Puppet;19616398]Too long, did not read. Man, you are crazy and sick, go with the doctor[/QUOTE] Yes, you did read. How else would you know if i'm crazy and sick if you didn't? Making comments about me being sick if you…

[QUOTE=Sid-Knee;19616251]You and Champion4ever are the sickest and most disturbed on this site. Crazy madness with no logic or knowledge. The pair of you need serious help. Lomachenko was in only his second professional fight when he fought Salido. He clearly…

[QUOTE=Mexican_Puppet;19615457]Man, you are fu.cking mad and sick. An old and past prime Klitschko ? Salido beat Lomachenko Canelo beat GGG Márquez beat Pacquiao All in their primes Sh.ut up, my ***** Mexican Boxing is better than U.K , easily[/QUOTE] You…

[QUOTE=Sid-Knee;19613161]Fury and Joshua together have equal or better wins than all Mexicans put together. Half your guys are nobodies who haven't even beat a good world class fighter yet. Then as I say you have guys getting robberies, weight cheating,…