Former WBC middleweight champion Julio César Chávez Jr. must spend at least six weeks without boxing after undergoing surgery to repair multiple fractures in the nose and 10 stitches that were put in to close the wound on his left eyebrow.

On Friday night in Arizona, Chavez Jr. was stopped by Daniel Jacobs in five rounds. The contest took place at light heavyweight.

After five rounds of action, Chavez Jr. advised the referee that he was unable to continue. He told the ref that he was having trouble breathing due to a broken nose. 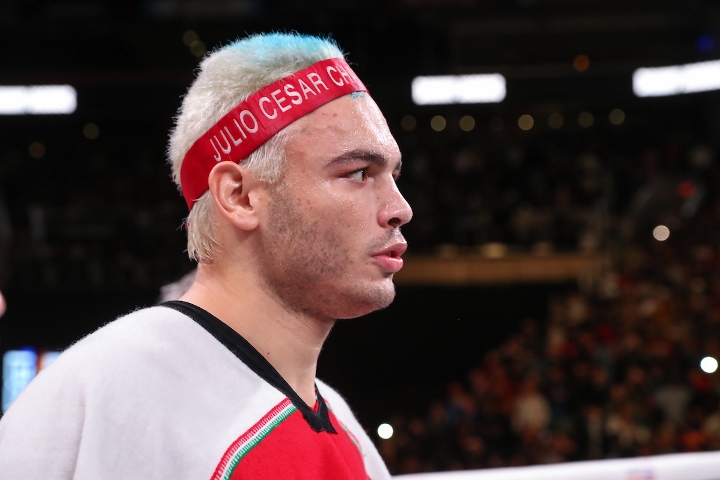 The local fans, who were mostly there to support Chavez Jr, quickly turned on the boxer and began pelting the ring with various objects after the fight was deemed over.

Chavez Jr. has had a history of issues leading up to the bout. He was suspended in Nevada for refusing to take a drug test, which forced the promoter Eddie Hearn to move the fight to Arizona. Then Chavez was unable to make the super middleweight limit of 168 and the contract weight was moved up to 173.

And then he refused to continue fighting beyond the fifth round - which Jacobs and many fans felt was nothing more than the Mexican star looking for a way out.

“It was a fracture and four micro-fractures, plus 10 stitches; in six weeks I can do sparring. I feel like I was fighting well, I was winning the fight, Jacobs was scared of my strength and when I started to get inside he would use his shoulder on me, use his elbows, he cut me with an elbow, and I started to bleed a lot, I could not see with with that eye and then he hit me with the shoulder on the nose. I have not seen the incident but I think it was like that, and then there came that head clash that exploded my nose inside and I could not pull air," Chavez Jr. said.

“With all due respect, Jacobs is a dirty fighter, he didn't let me fight, but we asked for a rematch, I don't know if it could happen, I got to hurt him in the fifth round, but then I was cut. And to everyone who says that I am finished, I am not finished."

Chavez's record dropped to 51-4-1 and 33 knockouts, falling for the third time in his last six professional fights in a span of four and a half years.

[QUOTE=NachoMan;20292546]3-way tie maybe with Victor Ortiz?[/QUOTE] Yeah Victor Ortiz was being marketed as the next Oscar De La Hoya

I really wish they would just put Chavez in with Beterbiev so he could get destroyed and all this nonsense could stop. Guy goes in 20 pounds heavier than Jacobs yet cries that he was being bullied? I live in…

[QUOTE=b morph;20273785]It’s a toss up between him and Broner as to who is the most disappointing boxer in history.[/QUOTE] 3-way tie maybe with Victor Ortiz?

[QUOTE=budfr;20274213]Jacobs was hugging, are you blind??? Chavez was hurting him, no way Jacobs can KO Chavez....Chavez had a 2 and a half years layoff, no training, drinking, and still was making Jacobs run and hug,,,,,,[/QUOTE]Jacobs was fighting a CW in…